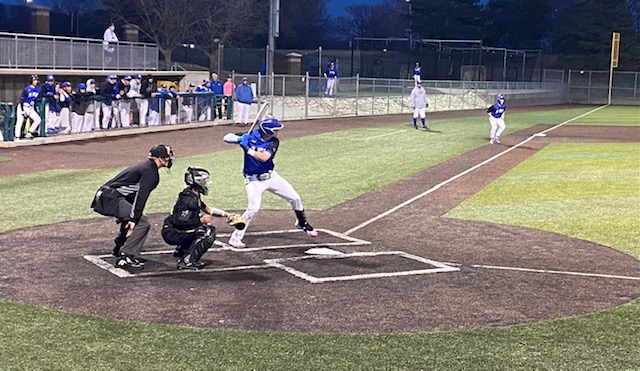 Creighton Prep suffered their first loss of the season as Bellevue West scored three runs in the top of the seventh inning to defeat the Jr. Jays 5-3 on Monday night at Jurgensen Park.

The Thunderbirds jumped on the Jr. Jays early, scoring a run in each of the first two innings off the bats of Juniors Nick Glantz and Nick Riggs.

After threatening in the first inning, Creighton Prep’s Coby Hatcher tripled with the bases loaded, driving in three runs to give the Jr. Jays their first lead of the game at 3-2.

Jr. Jay pitcher, Louis Schneckenberger regained his control after the first two innings, throwing three scoreless innings before being relieved, while the Thunderbird reliever Ryan Sullivan matched Creighton Prep inning for inning, heading into the top of the seventh inning.

Jr. Jay reliever Jack Everett experienced some control issues in the seventh, walking two batters and hitting another. The Jr. Jays went to the bullpen again, calling on junior Jack Thiele to get them out of a bases loaded jam. Thunderbird shortstop Jackson Steele roped a double over the right fielder’s head, scoring two and putting the Thunderbirds ahead 4-3.

“I just stayed relaxed up there and tried to swing the bat, tried to do something. Make a play,” Steele said. “When the ball dropped, I knew we were getting two [runs] for sure. I just wanted to make sure it was getting over.”

Bellevue West added another run in the inning off a Tanner Hosick sacrifice bunt.

Coach Shockey stuck with Sullivan in the bottom of the seventh and he shut the door on Creighton Prep with a strikeout, handing the Jr. Jays their first loss of the season.

For Bellevue West, this win was much needed after losing their last two and starting the season 2-6, but they understand that while the win was big, it was one game, and another team awaits them around the corner.

“It feels really good [to get the win], but we need to win the next game on Wednesday. Got to Beat Papio,” Steele said.

The Thunderbirds will look to build on their new momentum on Wednesday at Papillion La Vista, while Creighton Prep will look to get back in the win column today against the defending champs, Millard South.