Canning for Need and Fun 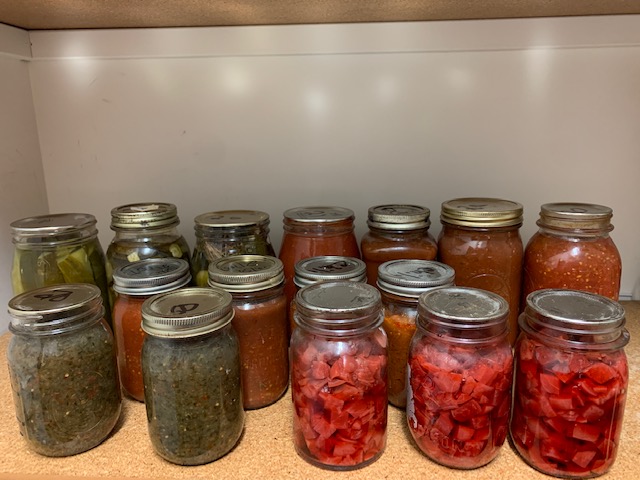 Canning dates back to the 1800s. Napoleon Bonaparte sought a way to safely feed his traveling army. Nicholas Appert delivered by heat-processing food in glass jars. Voila! Canning was born.

The first commercial cannery began in the US in 1912. But the everyday American still maintained a handle on canning their own surplus. This practice, often synonymous with farming or gardening, has become more of a distant memory in recent decades.

But in 2021 the dwindling canning and food preservation section at local grocery stores was visited with a newfound zest. Seasoned canners were suddenly met with decreasing – if not bare – shelves of supplies. Jars of varying sizes and lids were hot commodities. After two years of being cooped up thanks to COVID people were looking for a new hobby.

Nowadays there are two canning methods. Both methods require the cleaning and sterilization of canning jars, lids and rings prior to beginning. The pressure method is necessary to safely can vegetables, meat, poultry, seafood and foods containing a combination of low-acidic and high-acidic levels. The pressure method requires a particular pressure canner and specific amounts of time and pressure dependent on the food being processed.

The boiling water method is used for naturally high acidic foods. Fruits, soft spreads, tomatoes, pickled foods, etc. can be canned using this method. It involves submerging food-filled jars with lids for a specific amount of time dependent on the food being processed.

Lori Gradel of Bellevue, Nebraska learned how to can hot pepper jelly from the cook at her dad’s restaurant. “I mainly did it because I liked making homemade things to gift to people,” she said.

It wasn’t until she had her own garden on an acreage in Louisville, Nebraska years later that she started expanding her canning. Due to her bountiful garden, she learned how to can fruit jellies, peppers, salsas and pickles. She entered produce and canning into the county and state fairs. Her canned pickles won Grand Champion in Cass County.

Gradel’s always been one for hospitality. Her home is often alight with her married kids and grandkids. She loves to host people for home-cooked meals and will decorate for any and every holiday. Now with fruit trees and a garden atop a hill in Bellevue she still cans her goodies to gift to people.

But during COVID her canning hobby also became one of necessity. Falling into the at-risk categories, she and her husband couldn’t and wouldn’t go out. Canning gave her something to do. It also gave them something to eat.

Now, hopefully at the end of COVID, Americans’ wallets are being hit hard. Food costs are soaring at an alarming rate. Inflation rose by 7.9 percent alone in February. The dollar is being stretched as Americans are asked to do more with less.

Simmons learned the art of canning by watching and helping her mom and grandma over the years. Both master canners, they preserved chicken and a wide variety of produce from their gardens. One of her mom’s staples was applesauce.

“Applesauce was always a favorite. They’re naturally sweet so you don’t really have to add a lot of sugar. That was one thing that [my mom] really liked to incorporate into her canning. She could use applesauce in place of other things in her recipes,” said Simmons.

With the availability of apples in the area, Simmons maintains her mom’s applesauce tradition to this day. She also likes to can salsa, peach jam, and pear syrup. Thanks to a concord grapevine twisting its way around her fence, homemade grape jam has also become a family favorite.

While Simmons hasn’t ventured into pressure cooker canning yet, she did can dry goods several years ago. Her local church had a dry-pack canner for a time. Simmons was able to can oats and short-grain rice. Rice Pudding – also a family favorite – calls for short-grain rice which has been hard to find recently. Thanks to the dry-pack canner, she has some in her food storage. It is now ear-marked only for Rice Pudding.

But family favorite recipes aren’t the only reason why Simmons cans. She said, “For me it’s more about the nutritional content. I can control what’s being put into what I can. And I think flavor wise, there’s just nothing comparable on the store shelves to what you can do fresh and prepare on your own.”

That philosophy has been the biggest reason she continues to can. While canning is flavorful and nutritious, it’s also time-consuming and requires a financial investment to secure proper supplies.

Simmons was one of the many long-time canners who had a hard time finding canning lids last year. When she did find them, she bought them in excess so that future canning wouldn’t be impacted.

Lids are arguably the most important item in canning. Since they are the mechanism that seals jars and preserves food, they cannot be reused. When someone opens a jar of a family favorite treat, the seal breaks and so does the shelf-life of said item. Thus, it’s understandable that there was a collective panic that boiled throughout the canning community last year when lids were near impossible to find.

That panic seems to have dissipated this year as grocery store canning and food preservation shelves are well-stocked. Simmons thinks that can be attributed to people’s return to work and having less time to can. But for those with supplies and willing to take the time, canning can still be a money-saver.

“Anything you find canned [at the grocery store], you can can it. It can be a social activity if you get people together. Many hands do make light work and, again, the flavor that comes out, I mean, you’re just not going to get that in the store,” said Simmons.

Neither Gradel nor Simmons canned solely to save money or build up food storage. But the time to prepare is before the wind even blows. When each of them hit tough times, canning allowed them to stretch their budgets and their bellies.

As Americans continue to feel the pinch of ongoing inflation, trying a hand at canning could prove beneficial in an unforeseen time of need. While most canners preserve their garden’s yield, there are other ways to acquire surplus. Strategically shopping local grocery stores during sales, frequenting a farmer’s market, or enlisting in a bulk produce plan like Wenninghoff Farm offers are great options. It would require some effort but could just be the cushion one needs if and when the wind decides to blow. -30-