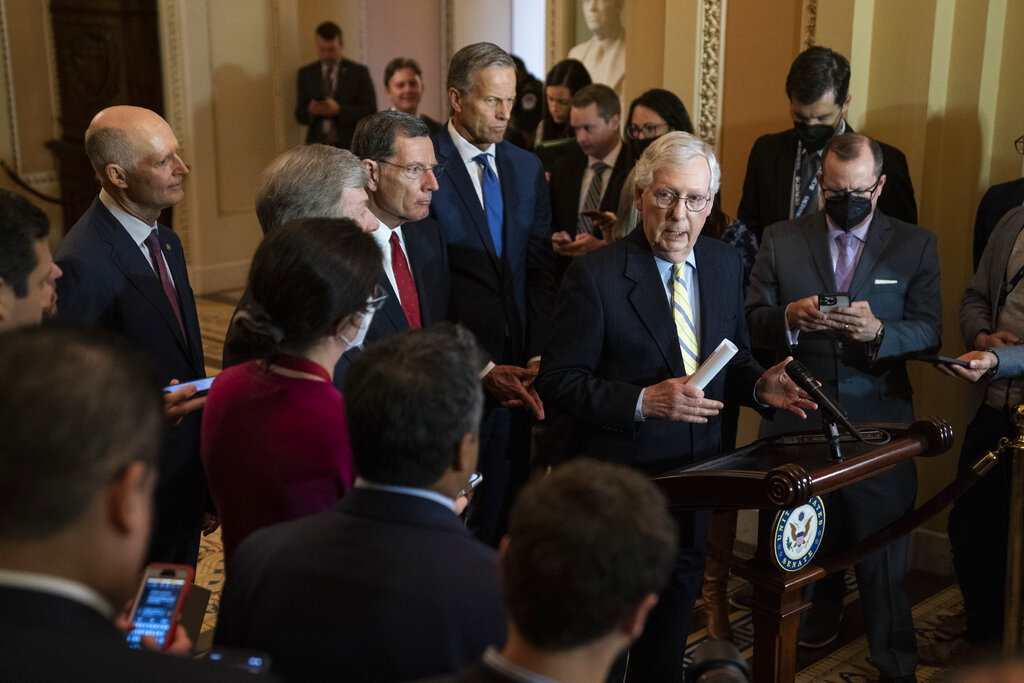 Republicans blocked a Democratic attempt Tuesday to begin Senate debate on a $10 billion COVID-19 compromise, pressing to entangle the bipartisan package with an election-year showdown over immigration restrictions that poses a politically uncomfortable fight for Democrats.

A day after Democratic and GOP bargainers reached agreement on providing the money for treatments, vaccines and testing, a Democratic move to push the measure past a procedural hurdle failed 52-47. All 50 Republicans opposed the move, leaving Democrats 13 votes short of the 60 they needed to prevail.

Hours earlier, Republicans said they'd withhold crucial support for the measure unless Democrats agreed to votes on an amendment preventing President Joe Biden from lifting Trump-era curbs on migrants entering the U.S. With Biden polling poorly on his handling of immigration and Democrats divided on the issue, Republicans see a focus on migrants as a fertile line of attack.

"I think there will have to be" an amendment preserving the immigration restrictions "in order to move the bill" bolstering federal pandemic efforts, Senate Minority Leader Mitch McConnell, R-Ky., told reporters.

At least 10 GOP votes will be needed in the 50-50 Senate for the measure to reach the 60 votes it must have for approval. Republicans could withhold that support until Democrats permit a vote on an immigration amendment.

Biden and Senate Majority Leader Chuck Schumer, D-N.Y., want Congress to approve the pandemic bill before lawmakers leave in days for a two-week recess. Tuesday's vote suggested that could be hard.

"This is a potentially devastating vote for every single American who was worried about the possibility of a new variant rearing its nasty head within a few months," Schumer said after the vote.

White House press secretary Jen Psaki said, "Today's Senate vote is a step backward for our ability to respond to this virus."

The new omicron variant, BA.2, is expected to spark a fresh increase in U.S. COVID-19 cases. Around 980,000 Americans and over 6 million people worldwide have died from the disease.

The $10 billion pandemic package is far less than the $22.5 billion Biden initially sought. It also lacks $5 billion Biden wanted to battle the pandemic overseas after the two sides couldn't agree on budget savings to pay for it, as Republicans demanded.

At least half the bill would finance research and production of therapeutics to treat COVID-19. Money would also be used to buy vaccines and tests and to research new variants.

The measure is paid for by pulling back unspent pandemic funds provided earlier for protecting aviation manufacturing jobs, closed entertainment venues and other programs.

Administration officials have said the government has run out of money to finance COVID-19 testing and treatments for people without insurance, and is running low on money for boosters, free monoclonal antibody treatments and care for people with immune system weaknesses.

At the 2020 height of the pandemic, President Donald Trump imposed immigration curbs letting authorities immediately expel asylum seekers and migrants for public health reasons. The ban is set to expire May 23, triggering what by all accounts will be a massive increase in people trying to cross the Mexican border into the U.S.

That confronts Democrats with messy choices ahead of fall elections when they're expected to struggle to retain their hair-breadth House and Senate majorities.

Many of the party's lawmakers and their liberal supporters want the U.S. to open its doors to more immigrants. But moderates and some Democrats confronting tight November reelections worry about lifting the restrictions and alienating centrist voters.

Sen. Catherine Cortez Masto, D-Nev., who faces a competitive reelection this fall, declined to say whether she would support retaining the Trump-era ban but said more needs to be done.

"I need a plan, we need a plan," she said in a brief interview. "There's going to be a surge at the border. There should be a plan and I've been calling for it all along."

Shortly before Tuesday's vote, Schumer showed no taste for exposing his party to a divisive immigration vote.

"This is a bipartisan agreement that does a whole lot of important good for the American people. Vaccines, testing, therapeutics," he said. "It should not be held hostage for an extraneous issue."

"This should not be included on any funding bill," he said of immigration. "The decision should be made by the CDC. That's where it has been, and that's where it belongs."

The federal Centers for Disease Control and Prevention, which initiated the move two years ago, said earlier this month that it would lift the ban next month. The restrictions, known as Title 42, have been harder to justify as pandemic restrictions have eased.

Trump administration officials cast the curb as a way to keep COVID-19 from spreading further in the U.S. Democrats considered that an excuse for Trump, whose anti-immigrant rhetoric was a hallmark of his presidency, to keep migrants from entering the country.

"I find it very ironic for those who haven't wanted to have a vaccination mandate, for those who did not want to have masks in the classroom, for them to suddenly be very interested in protecting the public," she said.

But Rep. Bennie Thompson, D-Miss., chairman of the House Homeland Security Committee, said he would support a Senate COVID-19 aid bill if it included the GOP effort to retain the Trump immigration restrictions.

"Why wouldn't I?" he said in a brief interview.