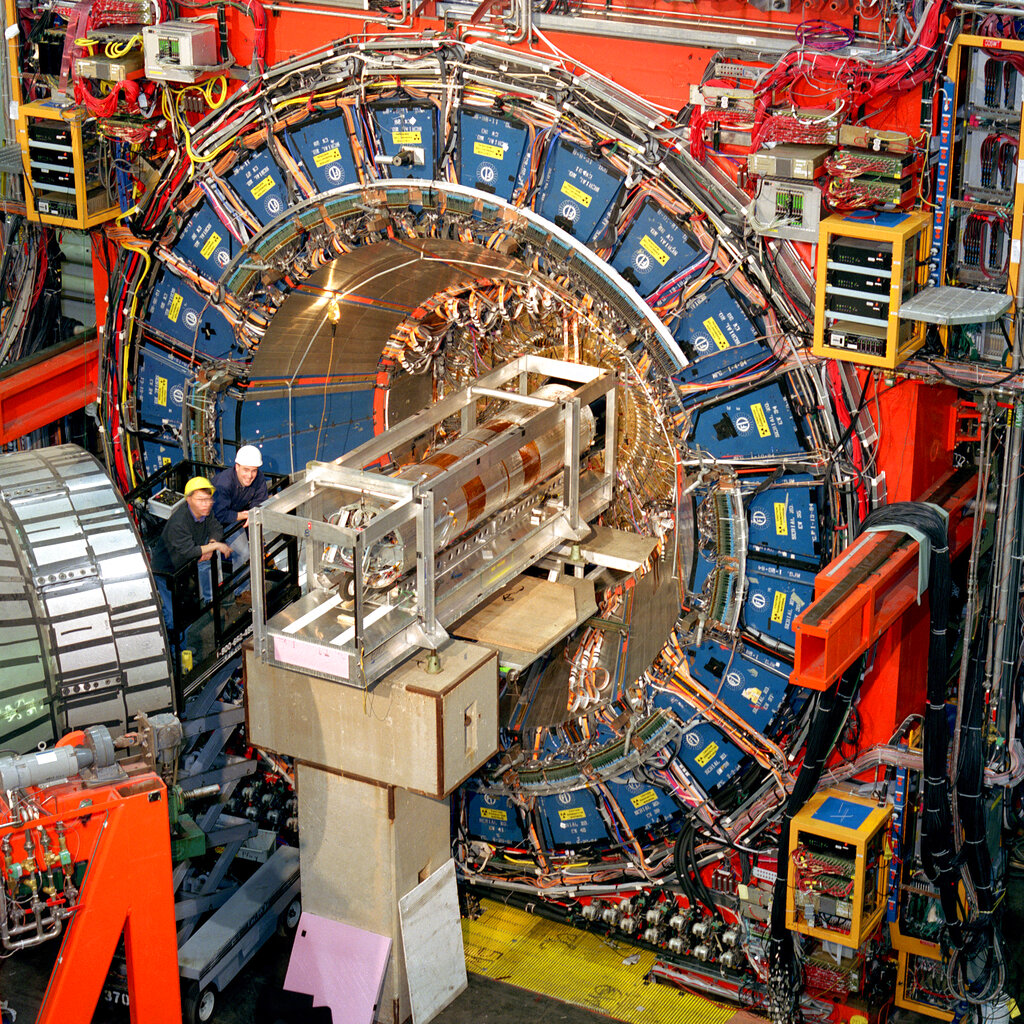 This undated photo provided by the Fermi National Accelerator Laboratory in April 2022 shows the facility's Collider Detector outside Batavia, Ill. In results released on Thursday, April 7, 2022, scientists at the lab calculated that the W boson, a fundamental particle of physics, weighs a bit more than their theoretical rulebook for the universe tells them it should. (Fermilab via AP)

The grand explanation physicists use to describe how the universe works may have some major new flaws to patch after a fundamental particle was found to have more mass than scientists thought.

"It's not just something is wrong," said Dave Toback, a particle physicist at Texas A&M University and a spokesperson for the U.S. government's Fermi National Accelerator Lab, which conducted the experiments. "It literally means something fundamental in our understanding of nature is wrong."

The physicists at the lab crashed particles together over ten years and measured the mass of 4 million W bosons. These subatomic particles are responsible for a fundamental force at the center of atoms, and they exist for only a fraction of a second before they decay into other particles.

"They are constantly popping in and out of existence in the quantum froth of the universe," Toback said.

The difference in mass from what the prevailing theory of the universe predicts is too big to be a rounding error or anything that could be easily explained away, according to the study by a team of 400 scientists from around the world published Thursday in the journal Science.

The result is so extraordinary it must be confirmed by another experiment, scientists say. If is confirmed, it would present one of the biggest problems yet with scientists' detailed rulebook for the cosmos, called the standard model.

Duke University physicist Ashutosh V. Kotwal, the project leader for analysis, said it's like discovering there's a hidden room in your house.

Scientists speculated that there may be an undiscovered particle that is interacting with the W boson that could explain the difference. Maybe dark matter, another poorly understood component of the universe, could be playing a role. Or maybe there's just new physics involved that they just don't understand at the moment, researchers said.

The standard model says a W boson should measure 80,357,000 electron volts, plus or minus six.

"We found it slightly more than that. Not that much, but it's enough," said Giorgio Chiarelli, another scientist for the Fermi team and research director for the Italian National Institute for Nuclear Physics. The Fermi team's scale put the W boson at a heftier 80,433,000 electron volts, plus or minus nine.

It doesn't seem like a big difference, but it is a huge one in the subatomic world.

But both the team and experts not involved in the research said such a big claim requires extra proof from a second team, which they don't have yet.

"It's an incredibly delicate measurement, it requires understanding of various calibrations of various little effects," said Claudio Campagnari, a particle physicist at the University of California Santa Barbara, who wasn't part of the Fermi team. "These guys are really good. And I take them very seriously. But I think at the end of the day what we need is a confirmation by another experiment."

Earlier, less precise measurements of the W boson by other teams found it to be lighter than predicted, so "maybe there is just something wonky about this experiment," said Caltech physicist Sean M. Carroll, who wasn't part of the research and said is "absolutely worth taking very seriously."

The finding is important because of its potential affect on the standard model of physics.

"Nature has facts," Duke's Kotwal said. "The model is the way we understand those facts."

Scientists have long known the standard model isn't perfect. It doesn't explain dark matter or gravity well. If scientists have to go in and tinker with it to explain these findings they have to make sure it doesn't throw out of whack mathematical equations that now explain and predict other particles and forces well, researchers said.