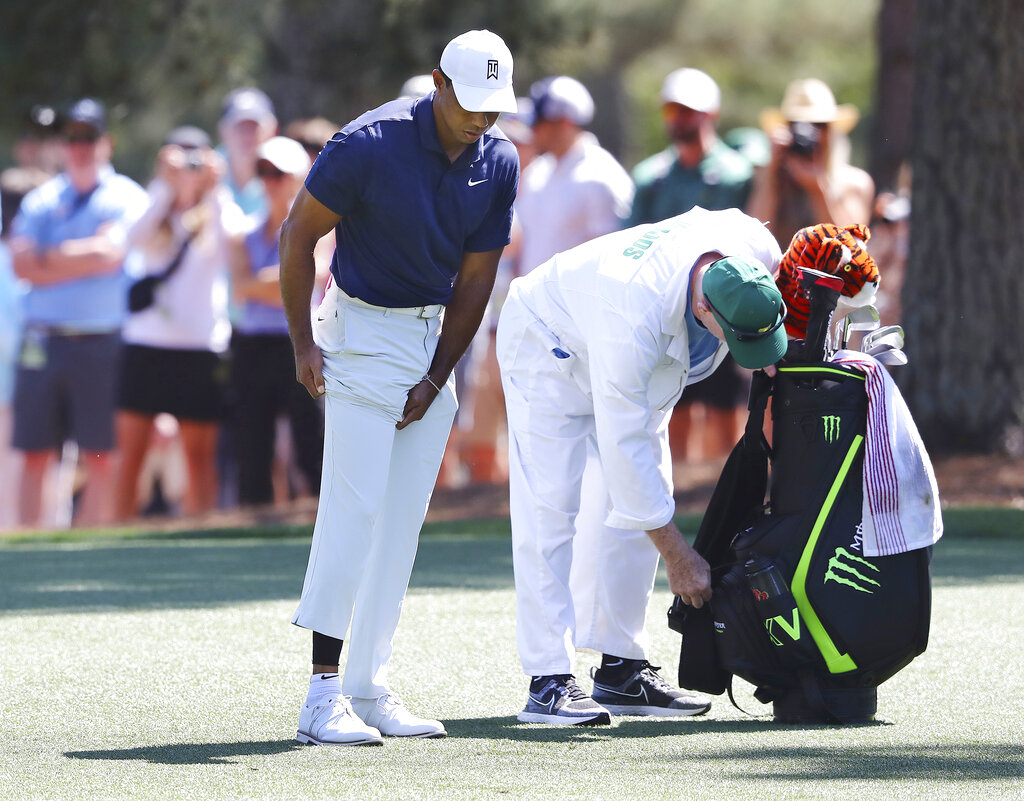 Tiger Woods pauses while getting in some work chipping at the practice range before his practice round for the Masters at Augusta National Golf Club in Augusta, Ga., Monday, April 4, 2022. (Curtis Compton /Atlanta Journal-Constitution via AP)

Tiger Woods is wearing Nike apparel this week, as always.

Such is the power of Woods: Not only is his mere presence at Augusta National this week a huge story — whether he decides to play in the Masters — but he's also created a huge side story by showing up for practice rounds Sunday and Monday wearing FootJoy shoes.

Woods hasn't explained the change yet; he's scheduled to address reporters Tuesday. It would make sense if the change was related to what are likely different physical needs now that he's trying to play on a right leg that was badly damaged in a car crash last year.

A statement released by Nike seemed to indicate that was the case: "Like golf fans around the world, we are delighted to see Tiger back on the course. He is an incredible athlete, and it is phenomenal to see him returning to the game at this level. His story continues to transcend sport and inspire us all. As he continues his return, we will work with him to meet his new needs."

Everything else about Woods' on-course ensembles has been as expected: His cap still bears the distinctive "TW" logo that has been his personal Nike branding for years, his short-sleeve shirts had the iconic Nike swoosh on the left side of the chest. Technically, Nike was on his feet, too — when counting the socks.

Woods wore Nike shoes when the world most recently saw him play, back in December at the PNC Challenge, a 36-hole scramble on a flat Florida course where he and his son Charlie finished second to John Daly and his son. Woods was allowed to use a cart in that event. The demands of playing the Masters simply wouldn't even compare, with the steep slopes and length of Augusta National serving as one of the tougher walks in golf.

Woods has been an endorser of Nike since 1996.

There are six amateurs in the Masters this year, and being here is obviously of massive significance to all of them.

For Keita Nakajima, it may mean a bit more — because he knows what the Masters means in his homeland, especially now that one of their own is the defending champion.

Nakajima is from Japan, as is 2021 Masters winner Hideki Matsuyama — the first Japanese man to win a major. Nakajima gets to play this year after winning last year's Asia-Pacific Amateur Championship in Dubai.

"I have been watching Masters many times on TV, and it's still like a dream," Nakajima said. "It's pretty much surreal. And I would like to do my best for the fans and feel my joy and do my best for this week."

He shared the stage for a news conference Monday with fellow amateur Aaron Jarvis, who is making his Masters debut after winning the Latin America Amateur Championship in the Dominican Republic in January.

Jarvis is from the Cayman Islands, home to about 70,000 people. He's the first player from that tiny country to make it to the Masters, and he's already had a pinch-me moment — getting turned down by Tiger Woods.

Jarvis was playing with U.S. Amateur champion James Piot on Sunday when they saw Woods playing and asked to join up. The answer wasn't the one they wanted.

"You know, there's no better 'no' from — or better rejection — than from Tiger Woods, right?" Jarvis said. "So, I thought would I give it a shot. I ran up to him and ran through the woods and asked, 'Mr. Woods, are you playing by yourself or can we join?'"

Woods said he was preferring to play alone.

When he finished his round, Woods and caddie Joe LaCava chatted with Jarvis for about 10 minutes.

"It was just incredible," Jarvis said.

Piot already has a memory like few others at Augusta National: He basically got to play an empty course Saturday. He went out after the Augusta National Women's Amateur ended and hardly saw another soul.

"Just me and my caddie," Piot said. "Nobody else, no members around the course. It was the craziest thing in the world having Augusta National to yourself. For a college guy, you really appreciate it. I mean, being an amateur and being able to be out at Augusta National alone, it was a memory I'll never forget.

It's the second time in the Masters for Hagestad, a career amateur who turns 31 on Sunday. He tied for 36th and was low amateur in 2017 at the Masters.

"Not to throw all the adages at you, but it's truly an honor and a privilege to be here," Hagestad said. "No, there's been a few times where I've been in tears, both privately and publicly."

Forecasters say more than an inch of rain could fall during a series of storms Tuesday. And that means the course might soften up — at least for a little while.

"It's firm," Webb Simpson said Monday. "The ball is running in the fairway as much as I've seen in a few years. Greens are already really firm, getting a little brown spots, which we love, but I think they know rain's coming (Tuesday). With the wind coming, it seems like the course will dry out pretty quickly again, but all in all, it's in really good shape."

Once the storms move on, temperatures might fall. The forecast shows overnight lows toward the end of the week could reach the low 40s, which would be significantly below normal for this time of year.

The Masters draws patrons from everywhere, but locals may have some clear rooting interests with seven former Georgia Bulldogs in the field.

And yes, they were hearing "Go Dawgs" on Monday.

"When I was getting recruited, the negative recruiting against Georgia is that we couldn't put guys on tour," Harman said. "That was the pitch from the other schools. ... It's nice that we've sort of changed that narrative."