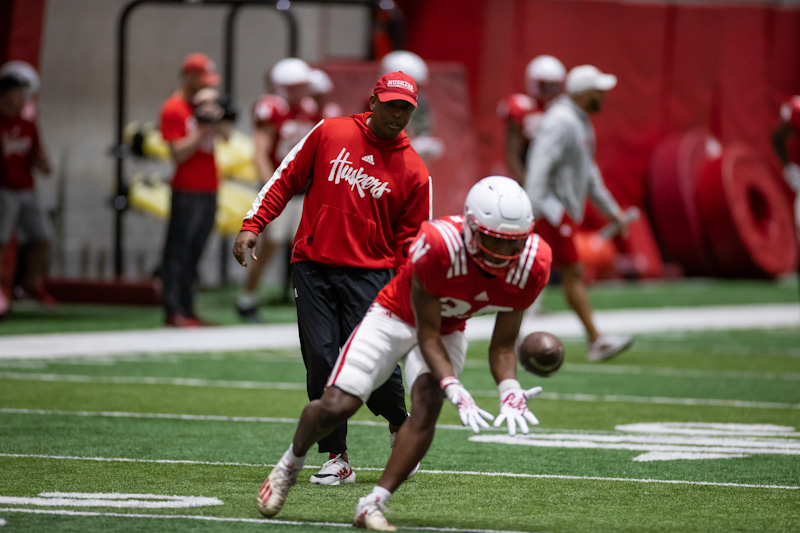 If there was a picture next to the word competitiveness in the dictionary, it might well be one of Nebraska receivers coach Mickey Joseph. As a former Cornhusker quarterback, Joseph understands better than most that Saturday’s spring game is way more than a glorified scrimmage if he wants to continue to see significant improvement from the current crop of Nebraska wide receivers. Joseph made it clear to reporters earlier this week that he doesn’t want to see any of his guys taking time off on the field.

Joseph said that any opportunity to forge a connection between quarterback and wide receiver is a must for the new Nebraska offense to succeed whether it’s in the spring game or practice.

Based on his resume Mickey Joseph is someone that Cornhusker fans might just want to listen to.

At LSU, Mickey Joseph saw firsthand what the benefits of a well-rounded relationship between quarterback and receiver can do for a football team. Joseph was a key part of LSU’s 2019 national championship staff. His receivers helped the Tigers set an FBS record with 60 touchdown receptions while helping Joe Burrow rank third in FBS history in single-season passing yards (5,671).

Joseph has a proven track record of recruiting and developing wide receivers. Recognized as a Rivals Top 25 Recruiter, Joseph had four wide receivers selected in the first three rounds of the past two NFL Drafts (2020 and 2021). This includes Ja’Marr Chase, who was the 2021 NFL Offensive Rookie of the Year after being selected with the No. 5 overall pick.

After all his hard work with the young receiving corps these past few weeks, Joseph finally took some time to reflect on his return to Lincoln and what it will be like to take the field on Saturday for the spring game.

Mickey Joseph wants every Cornhusker fan to know that this Saturday’s spring game is another chance for Nebraska as a football team to begin to make every moment count.

"We have a lot of work to do, and they understand that. I understand that," Joseph said. "You cannot say hey spring football. I love the spring I really do but at the end of the day, they are not going to count that spring game in October. They are going to start counting when we play Northwestern. So, after this spring game, we put this to rest and we have to have a really good summer. We talked about having a great summer and just working. We are still getting to know each other now. They are still feeling me out and I am still feeling them out and getting to know my players. I think this summer is going to be really important for us."  -30-