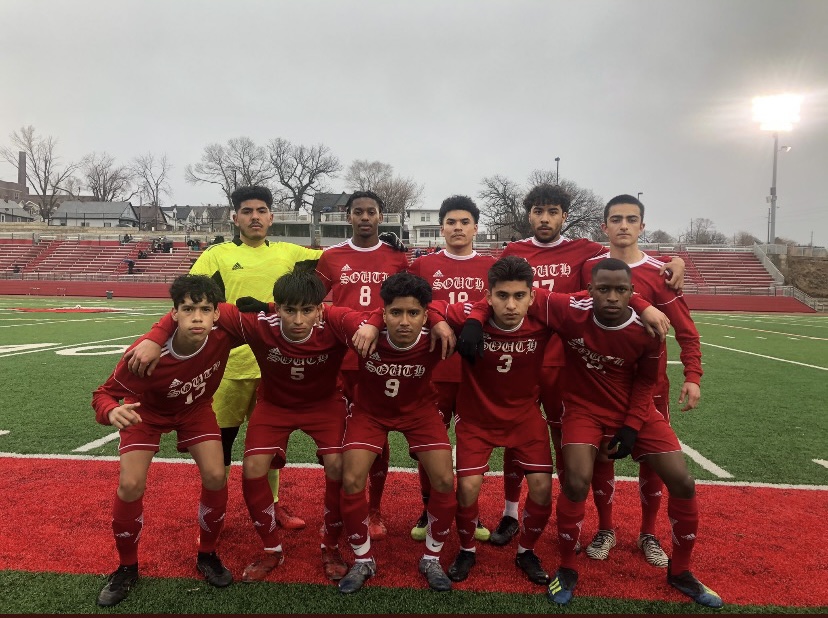 For Omaha South, the athletic program does not have the deepest tradition of winning on its resume. While boys basketball has won six titles, the latest in 2019, the football team has made state only four times, never making it out of the first round. Their girls basketball team has never made a state appearance.

Packers soccer coach Joe Maass has been at Omaha South for over 20 years trying to change that narrative. Maass and the Packers have won four state titles since 2013, including last year, making them the two-time defending champions.

“I graduated in 1992 from Bryan High, (and) my impression of South High back then was that we knew we were going to beat them, whether in football or soccer, and we didn’t really think much of South back then,” Maass said. “At the time, when I took the job, it never occurred to me that what is going on now could happen. I just thought, I am going to get paid to help kids and if I can ever get to .500, people will think I am amazing.”

In 2004, Maass thought about quitting coaching after a 24-round shootout loss in districts, coming up just short of reaching the state tournament.

“They gave me a plaque that year. I remember looking at the kids and thinking, maybe we can do something here and just kept going,” Maass said. “I got with Dennis Beckmann and started doing club soccer and started getting to know families, kids and coaching, and it just kind of came.”

While working with Beckmann – his former high school coach – Maass worked on refining his coaching skills at the club and building relationships.

“I also taught at Norris. I coached soccer there and when I moved over [to Omaha South] all those kids came with me,” Maass said. “The kids played with other kids and then you start talking to other kids, realizing that if we can all play together, we can be great and then it just kind of changed and has spiraled from there.”

At 23 years on the job, Maass is one of the longest tenured coaches in the Omaha Public School system, which has had a lot of turnover with head coaches the last few years.

“A lot of people don’t want to stick around if they’re not winning. Well, I don’t want to say winning is the only thing, but you start winning, then you get the notoriety to where people will care, and they write articles. It keeps you going, along with helping the kids. If we were getting pounded every year, to me that’s the most impressive coach. It’s the guy, or girl, who is getting beat, but he stays there for 15 years, but they are up against a lot.”

“I think [OPS] does what they can [for coaches] but I think our district is so big that a lot of [coaches] may feel like they are on their own. You get the natural support administratively … a good athletic director makes a difference.”

Maass credits the strong support he has been given and winning as the two factors that have kept him engaged and has allowed him to sustain.

“I think when coaches are driving kids and they are doing all the stuff they do, at some point you get burned out. In my case, I think I got lucky. When I was starting to burn out, we started winning a little bit and it refueled the fire. It made me feel like we could do this, and then other people saw us doing well and would jump in. Then cross country got a little better, and basketball got a little better. Under (Cara) Riggs, all of the sports just got better,” he said. “After Riggs, I had Veronica Huerta as an athletic director, she kind of saw me working with kids constantly and she got behind it because she believed it would be good. Eventually it was. Once we started having success there was more buy-in from the administration and the community. I feel extremely fortunate. If you can get a really good Athletic Director to work for you are sitting good, like the guy I work for right now (Mike Greene-Walsh). I know he supports me and that’s important.”

In sports, winning typically cures all and the support helps in winning. Maass mentioned how his recent athletic directors would attend games for all school sports and the appreciation that the coaches and athletes would feel from that support.

The Omaha South community factors strongly into that support and it’s mostly the kids from the community that are providing the wins.

“Different clubs help me out and I help them out. It really is like a community effort. A lot of the parents already know me before they send their kids here,” Maass said. “I work with a soccer club, they practice at South High, and I help them whenever I can. I’m always around the community so it makes it easier to have success here. Most of our kids are from around here, I mean we do get some transfers, but every school gets those now.”

Maass acknowledges that with the school demographic being primarily Hispanic, there is a passion for soccer, but believes the diversity of all of the athletes in the community has added to the skill level and passion.

Most of the soccer talent that enrolls to Omaha South has had years of soccer experience with clubs from Impact to OHA. With the community being lower income, Maass and assistant coaches will operate buses so kids can attend practices.

The top goal from Maass and his coaches, is to help their kids get opportunities beyond high school.

“My angle is always to get them into college. When most kids come to me, I am thinking most kids will go to NAIA. Division I scholarships are hard to get. [A college coach] once told me, the first thing division I coaches look at are overseas players, then they look at junior college and then down to the high school. For a high school boy to get a division I scholarship out of high school is hard. There are opportunities out there, but we are in Nebraska, so it’s a little harder to get identified here.”

Even in Nebraska, Maass has put Omaha South on the map of the national soccer scene. Currently, the Packers are 5-1 with their only loss being recent to another top ranked program in the state, Creighton Prep.

The Packers did lose some experience this past season, but are returning Iowa Western commit Edwin Cisneros, who was Gatorade Nebraska Boys Soccer Player of the Year in 2020-2021 season.

Cisneros has spent all four of his years playing for Maass at Omaha South and is grateful for the program.-

“I feel like I have developed a lot, thanks to my teammates as well,” Cisneros said. “All four years have been different, and you have to learn to adapt, and once you learn how to adapt, everything goes up. We work hard every single day and it shows on the field. Work hard and you get the results.”

Cisneros and most of his teammates grew up playing soccer together, so winning on this stage at the level Omaha South has, with his friends, is a big deal.

“It means a lot to me,” he said. “If you are the team to beat, then you are obviously one of the best in the state. We are proud of that, and we look to compete because every team wants to come out to beat us. We want the competition because it makes us better.”

Cisneros is hungry for another state title and even though he is committed to Iowa Western, his dream would be to suit up for Creighton Bluejays one day.

With Cisneros in his last year and the new Buena Vista High School opening next year, Maass knows that will provide a challenge in his 24th year of coaching.

“With the new school Buena Vista opening, I could be wrong, but I think all the schools near will suffer a little bit with losing some kids and will drop off a little. In soccer, they will probably play a lot of freshmen and sophomores, but I don’t think it will take them long to be competitive.”

With that challenge coming, Maass is always looking for new ways to challenge or give his players an edge.

“In the wintertime, most teams play in the high school league at the Omaha Sports Complex, but it is super expensive. I have a connection in the Impact Latino adult leagues, so we put our teams in there to where they can coach themselves and play. The games are kind of early on Saturdays, so it teaches them a little discipline to make sure they are getting themselves up and there on time,” Maass said.

Maass gives a lot of credit to his assistant coaches he has had over the years and attributes a lot of the program’s success to them.

“Soccer is not one of those deals where you can walk out as one guy and bunch of kids anymore. It can be that way if you want, but if you are good coach, you should keep people around you to challenge you and make you better,” he said.

With back-to-back titles, community support, a strong coaching staff and last year’s reigning Gatorade player of the year, Cisneros and the Packers still feel like they have a lot to prove.

“[We always feel like underdogs], it’s always been like that. We like that competition, it’s what pushes us through,” Cisneros said. “I feel like we’re overshadowed by the bigger schools, like Creighton Prep, but at the end of the day, we have four state titles.” -30-