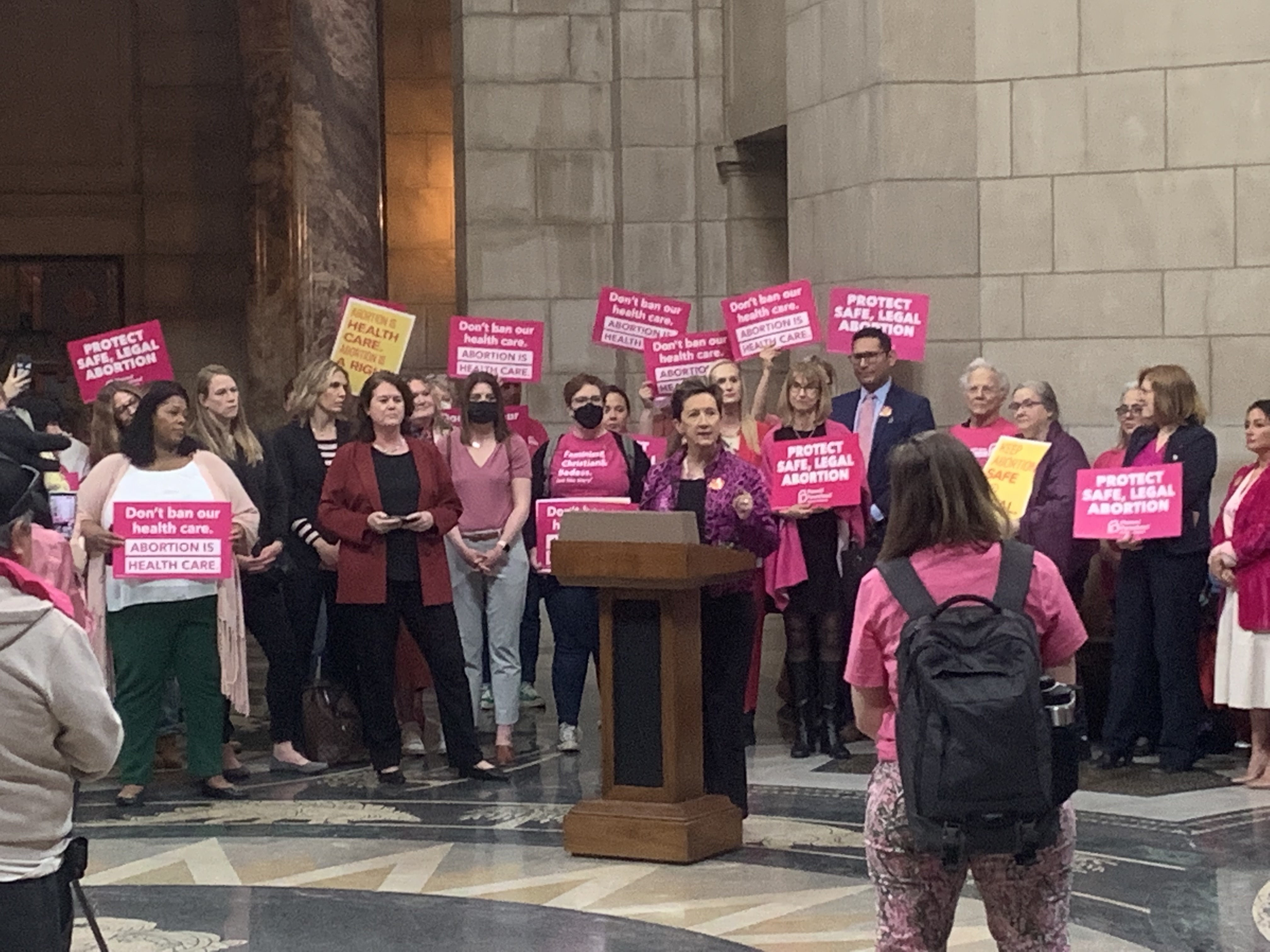 Over 100 Pro-Choice activists turned out for a rally inside the Capitol on Wednesday. The event featured several state senators, representatives from Planned Parenthood and groups like the Center for Women’s Advancement.

Many of those in attendance filled the balcony earlier in the morning for the debate on LB933. LB933 is the Nebraska Human Life Protection Act introduced by Senator Joni Albrecht. Albrecht’s bill would change Nebraska’s abortion laws in the event the Supreme Court overturns Roe vs Wade.

Two of the State Senators who spoke were Megan Hunt of Omaha and Patty Pansing Brooks of Lincoln. Both expressed their commitment to the cause of choice and to defeat LB933. Andi Curry Grubb who serves as Nebraska Executive Director of Planned Parenthood of North Central States also spoke.

The speakers received numerous ovations throughout the half hour long event. The majority of those in attendance wore a variety of Planned Parenthood’s pink shirts and held signs containing pro-choice messages. One Planned Parenthood activist, Dan Gilbert of Omaha, was in the balcony watching the debate during the morning and planned to be on hand all day.

Gilbert told NSN, “I choose to live in Nebraska with my family…If we want Nebraska to be a place that people continue to choose to live we have to have the highest degree of respect for every individual. To have a state senator come on the floor today and say Nebraska is a Christ-centered state gets me to the core. I'm very active in the Jewish community here, trying to choose to be here and to have an elected official come here and say we're Christ-centric is insulting, not just to me, but to 150 years of Jews that have chosen to call Nebraska home.”

Gilbert referenced an exchange between Senators Hunt and Albrecht that morning. Hunt criticized LB933 as far-right Christian legislation that doesn’t reflect the state’s values. Albrecht defended the bill and said she believed Nebraska to be a “Christ-centered state”.

When asked if there was any common ground between the longstanding life and choice sides of the debate Gilbert said, “I've been continually disappointed that more folks on the other side don't recognize the value of an individual's conscious belief to make decisions about this issue. It feels incredibly un-American and un-Nebraskan to tell people how to think or feel and to legislate that… The other thing [common ground] is the reality is it's in everyone's interest to have a higher standard of health care and higher standard of support for all of our Nebraskans. It's in everyone's interests for women to get the highest standard of care.”

After the rally senators convened again for debate on LB933. The debate was expected to consume the rest of the day’s agenda. NSN will report the results of the debate and General File vote on LB933. -30-