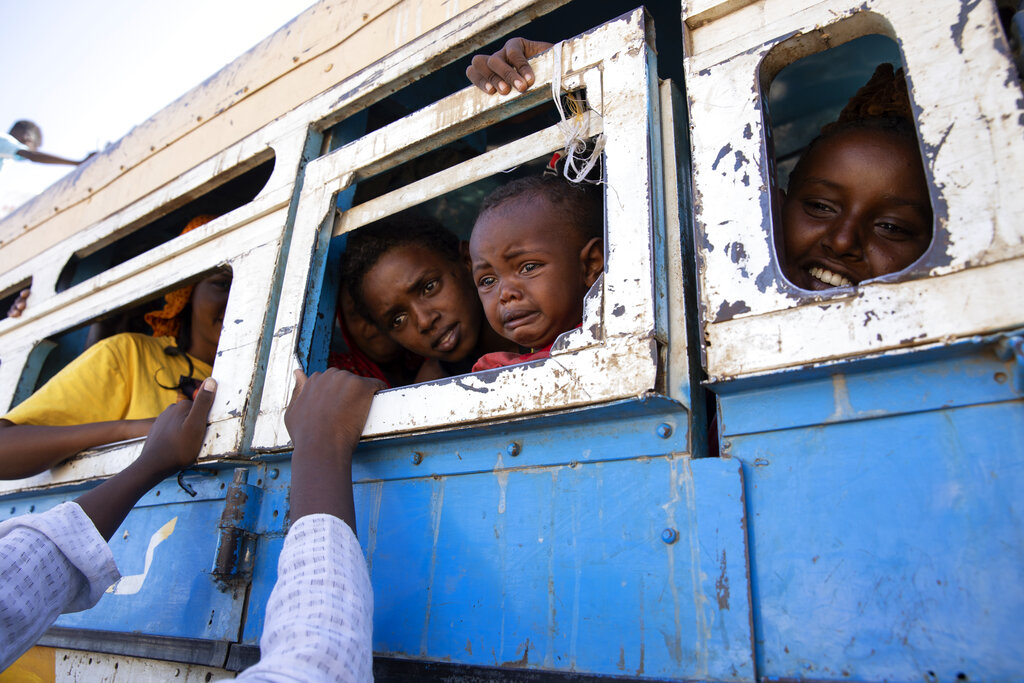 Refugees who fled the conflict in Ethiopia's Tigray region ride a bus going to the Village 8 temporary shelter, near the Sudan-Ethiopia border, in Hamdayet, eastern Sudan on Dec. 1, 2020. Widespread abuses against civilians in the western part of Ethiopia's embattled Tigray region amount to war crimes and crimes against humanity, Human Rights Watch and Amnesty International have charged in a new report Wednesday, April 6, 2022. (AP Photo/Nariman El-Mofty, File)

Widespread abuses against civilians in the western part of Ethiopia's embattled Tigray region amount to war crimes and crimes against humanity, Human Rights Watch and Amnesty International have charged in a new report.

The crimes were perpetrated by security officials and civilian authorities from the neighboring Amhara region, sometimes "with the acquiescence and possible participation of Ethiopian federal forces," the rights groups say in the report released Wednesday.

The abuses are "part of a widespread and systematic attack against the Tigrayan civilian population that amount to crimes against humanity as well as war crimes," the report says.

Ethiopian federal authorities strongly refute allegations they have deliberately targeted Tigrayans for violent attacks. They said at the outbreak of the war in Nov. 2020 that their objective was to disarm the rebellious leaders of Tigray.

Ethiopian authorities said Wednesday that they are "carefully examining" allegations in the rights groups' report. While the report has "ideas that are not useful for any peace effort, the government will reaffirm its determination to investigate all human rights violations and make public the results," said a statement from the Government Communication Service.

The report, the result of a months-long investigation including more than 400 interviews, charges that hundreds of thousands of Tigrayans have been forced to leave their homes in a violent campaign of unlawful killings, sexual assaults, mass arbitrary detentions, livestock pillaging, and the denial of humanitarian assistance.

Widespread atrocities have been reported in the Tigray war, with Ethiopian government troops and their allies, including troops from neighboring Eritrea, facing most of the charges.

Fighters loyal to the party of Tigray's leaders — the Tigray People's Liberation Front, or TPLF — also have been accused of committing abuses as the war spread into neighboring regions. Fighters affiliated with the TPLF deliberately killed dozens of people, gang-raped dozens of women and pillaged property for a period of several weeks last year in Amhara region, Amnesty said in a report released in February.

The new report by Human Rights Watch and Amnesty International focuses on attacks targeting Tigrayans in western Tigray and describes them as "ethnic cleansing," a term that refers to forcing a population from a region through expulsions and other violence, often including killings and rapes.

Publicly displayed signs in several towns across western Tigray urged Tigrayans to leave, and local officials in meetings discussed plans to remove Tigrayans, according to the report. Pamphlets appeared to give Tigrayans urgent ultimatums to leave or be killed, the report says.

"They kept saying every night, 'We will kill you … Go out of the area,'" said one woman from the town of Baeker, speaking of threats she faced from an Amhara militia group, according to the report.

Western Tigray has long been contested territory. Amhara authorities say the area was under their control until the 1990s when the TPLF-led federal government redrew internal boundaries that put the territory within Tigray's borders. Amhara officials moved swiftly to take over the region when the war broke out.

The outbreak of the war "brought these longstanding and unaddressed grievances to the fore: Amhara regional forces, along with Ethiopian federal forces, seized these territories and displaced Tigrayan civilians in a brutal ethnic cleansing campaign," the report says.

U.S. Secretary of State Antony Blinken asserted in March 2021 that ethnic cleansing had taken place in western Tigray, marking the first time a top official in the international community openly described the situation as such. That allegation was dismissed by Ethiopian authorities as "a completely unfounded and spurious verdict against the Ethiopian government."

The new report corroborates reporting by The Associated Press on atrocities in the war, which affects 6 million people in Tigray alone.

In June Ethiopia's government cut off almost all access to food aid, medical supplies, cash and fuel in Tigray. The war has spilled into Amhara and Afar regions, with Tigrayan leaders saying they are fighting to ease the blockade and to protect themselves from further attacks.

Facing growing international pressure, Ethiopian authorities on March 24 announced a humanitarian truce for Tigray, saying the action was necessary to allow unimpeded relief supplies into the area. Trucks bearing food supplies have since arrived in the region.

The AP last year confirmed the first starvation deaths under the blockade along with the government's ban on humanitarian workers bringing medicines into Tigray.

Estimated tens of thousands of people have been killed in the war. But there is little hope for peace talks as Ethiopian authorities have outlawed the TPLF, effectively making its leaders fugitives on the run.

Among their recommendations, the rights groups call for a "neutral protection force" in western Tigray, possibly with the deployment of an African Union-backed peacekeeping mission, "with a robust civilian protection mandate."

Their report also urges the U.N. Security Council to impose an arms embargo targeting all the warring parties.