Tiger Woods Plans to Play, Thinks he can Win the Masters 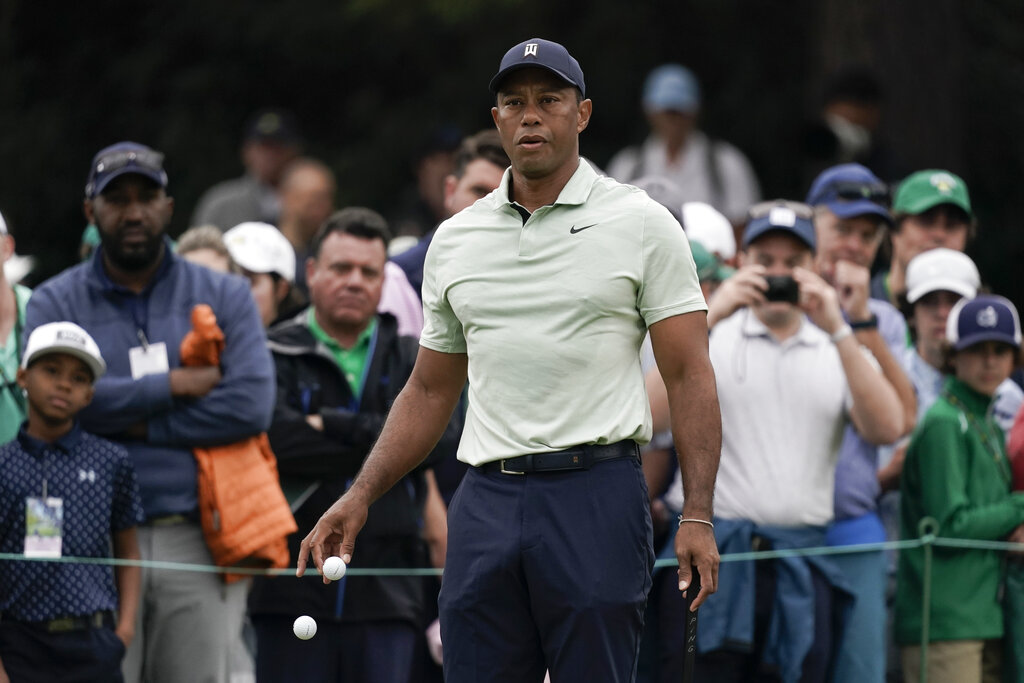 Tiger Woods drops golf balls on the driving range during a practice round for the Masters golf tournament on Tuesday, April 5, 2022, in Augusta, Ga. (AP Photo/Charlie Riedel)

Two words can go a long way when Tiger Woods is behind them.

No one would have been surprised if Woods never played golf again after a car crash in Los Angeles that damaged his right leg so badly he said doctors raised the prospect of amputation. Out of the public eye for nine months, Woods sent hopes soaring last November with a video of him swinging the club with a simple message, "Making progress."

And here he is at Augusta National, making a Monday practice round feel like Sunday at a major because of the gallery, walking the steep slopes, swinging well and making it clear he has every intention of playing in the Masters.

Does he think he can win?

Woods offered the shortest answer of his press conference: "I do."

He said Tuesday he is planning to play and thinks he can win. Never mind that it will be 508 days from the last time he played a tournament where he had to walk, or that he returns to this Masters with screws and rods still holding the bones in place in his right leg.

Woods also is 46. He would be the oldest Masters champion by three weeks over Jack Nicklaus.

The biggest question is how he holds up over 18 holes for four straight days. Woods walked 18 holes last week — his first big test — during a scouting trip with 13-year-old son Charlie (including a stop at the Par 3 course).

He played the back nine on Sunday, the front nine on Monday.

Woods plans nine more for Wednesday and then it's "game time." He is to tee off at 10:34 a.m. Thursday with Louis Oosthuizen and Joaquin Niemann.

"I can hit it just fine. I don't have any qualms about what I can do physically from a golf standpoint," Woods said. "Walking is the hard part. This is normally not an easy walk to begin with. Now given the conditions that my leg is in, it gets even more difficult.

"Seventy-two holes is a long road and it's going to be a tough challenge," he said. "And a challenge that I'm up for."

That might be the biggest reason Woods is even at Augusta National for more than the sushi and miso-glazed cod and Wagyu beef that defending champion Hideki Matsuyama put on the menu for the champions-only dinner Tuesday night.

If he never plays — if he never wins — Woods said he is satisfied with what he has achieved.

His 15 majors are second only to Jack Nicklaus and his 18, the gold standard in golf. He is tied with Sam Snead for the PGA Tour career record with 82 wins.

So why keep coming back? What else is there to prove?

"I don't show up to an event unless I think I can win it. So that's the attitude I've had," he said. "There will be a day when it won't happen, and I'll know when that is."

Shortly after he spoke, the starting times were released. Woods is helped by being part of the early-late rotation, meaning he will have some 22 hours between rounds.

Otherwise, Tuesday was mostly a wash. Woods wasn't planning on anything more than working on the range, anyway, and even that worked in his favor. Heavy storms moved over Augusta about the time he finished his work, and the course was closed the rest of the day.

As long as Woods has been part of Masters lore — Nicklaus and Arnold Palmer once predicted he would win more green jackets than both of them combined (10) — the reality is rust from no serious competition and a body that has endured at least 10 surgeries to both legs and his back.

But he's planning to play, and that feels like enough. For now.

"I think that the fact that I was able to get myself here to this point is a success," Woods said. "And now that I am playing, now everything is focused on, 'How do I get myself into the position where I'm on that back nine on Sunday with a chance?' Just like I did a few years ago."

That was 2019, his fifth Masters title that followed four surgeries the previous five years on his lower back.

"How many comebacks has he had?" Jordan Spieth asked in wonderment.

There was the return from reconstructive knee surgery after his 2008 U.S. Open victory. He won seven times worldwide the following year. There was a return to No. 1 following the implosion in his personal life, and before the back surgeries.

Nothing compares with this one, mainly because of the walking involved on a leg so badly damaged that Woods spent three months in a hospital bed before advancing to a wheel chair, crutches, a compression sleeve and still the occasional limp.

"It's amazing if you think about where he was at a year ago to now," Spieth said. "I don't know how many people — if anybody — could be out here. And this is not an easy walk. So to be out here and not to throw his age in the mix, but I don't think that helps much for that recovery.

"But is anybody surprised?"