Tiger Woods Overshadows Masters with So Many Scenarios 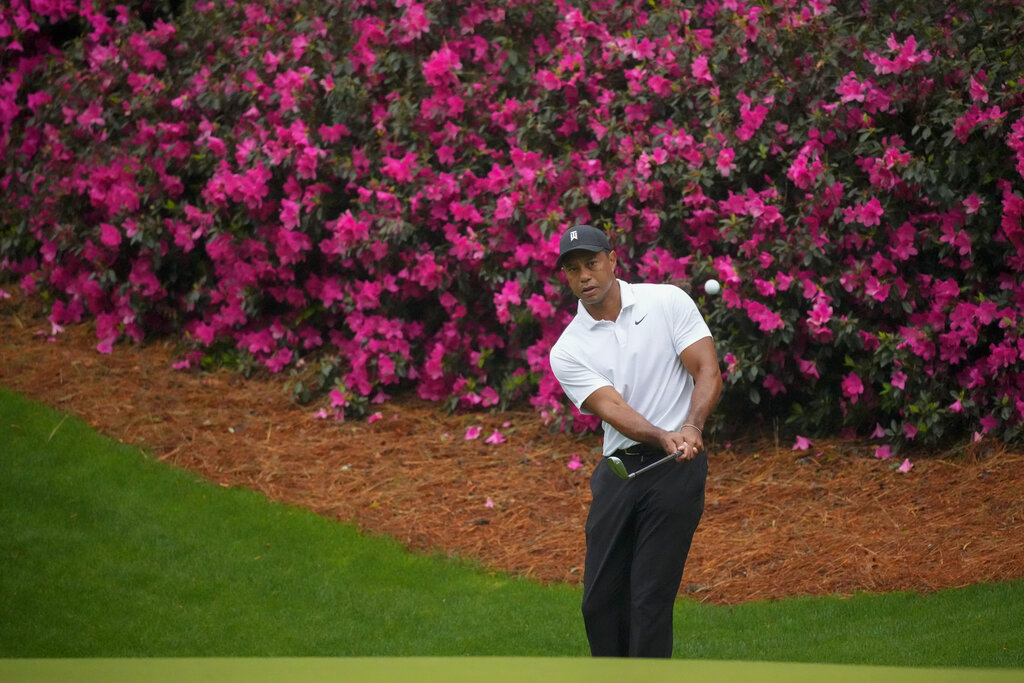 Tiger Woods chips to the green on the 13th hole during a practice round for the Masters golf tournament on Wednesday, April 6, 2022, in Augusta, Ga. (AP Photo/Charlie Riedel)

Five players can go to No. 1 in the world by winning the Masters. Another can complete the career Grand Slam with a green jacket. Such is the depth of talent these days in golf on the eve of the first major of the year.

And such is the power of five words at 10:34 a.m. Thursday that are sure to overshadow everything else on the opening day of the 86th Masters.

Those words from the first tee at Augusta National haven't been uttered since Nov. 15, 2020, the last time Woods played — and walked — in a tournament.

For all its youth — the top seven players in the world are 30 or younger — golf still isn't ready to let go of its past, especially when that past is Woods and there was every reason to wonder if he would ever compete at this level again.

Along with images of Woods slipping on any of his five green jackets are those of his crumpled SUV at the bottom of a hill in suburban Los Angeles from his harrowing crash 14 months ago that left him confined to a hospital bed for three months.

In December, when he rode a cart to compete in a 36-hole event with his son, and Matt Kuchar suggested his swing was PGA Tour-ready, Woods smiled and said, "No, no, no, no. I totally disagree. I'm not at that level. I can't compete against these guys right now. No."

And then on Tuesday, he said he was going to play and added a short time later, "I don't show up to an event unless I think I can win it."

"It's just truly amazing. I don't even know how else to say it," Masters Chairman Fred Ridley said Wednesday. "I would have probably taken some pretty high odds a few months ago, even a few weeks ago, whether or not he would be here.

"But when you think about it, it really shouldn't surprise us. He is one of the most determined, dedicated athletes that I have ever seen in my life."

Woods is back — again — and the 90 other players at Augusta National feel like nothing more than an afterthought until scores are posted.

"Tiger takes a lot of attention away from all of us, which I think is a good thing for us," said Scottie Scheffler, making his debut as the No. 1 player in the world. "He's used to being in the spotlight. Tiger is the needle for professional golf."

Tigermania has been in full force ever since the gates opened Monday morning, and the gallery filled every inch behind the ropes for the nine holes he played with Justin Thomas and Fred Couples. It was like that again Wednesday, when the trio played the back nine, beating the rain.

On the par-5 second hole, Louis Oosthuizen had a fairway metal in hand as he tried to reach the green. Only about 150 people lingered behind to watch. On the third fairway, the caddie for Joaquin Niemann was walking the course to check yardages when someone suggested he should enjoy such a quiet day. Gary Matthews turned and smile.

Woods is grouped with Oosthuizen and Niemann for the opening two rounds. On the other side of the course, both sides of the 15th fairway were lined with spectators to watch Woods take two shots with his fairway metal to reach the green. They followed him in. Practice tickets are only for one day. Catch him while you can.

"Tiger is Tiger," Couples said. "He's not like a lot of us, where I've been injured even at age 35 and I go play just to play. He's not going to do that. He's won so many times, and he's just not a guy to go do something mediocre. He'll compete, and he'll be ready to roll."

Rain interrupted the final day of practice after about three hours and cleared up in time for the start of the Par 3 Tournament, the first time that was held since 2019 because of the pandemic. Storms halted this edition of the Par 3.

And then the curtain rises on the Masters which has rarely held so much intrigue.

Scheffler is the new No. 1 in a world of golf so balanced at the top that Jon Rahm, Collin Morikawa, Viktor Hovland, Patrick Cantlay and Cameron Smith have a mathematical chance to replace him.

This is different from other years in which only a few of golf's best players have anything to show for it. Scheffler is the only player who has won this year while ranked among the top 10. Dustin Johnson and Justin Thomas have gone more than a year without winning,

Rory McIlroy is not on that list, though he can claim something far greater. The Masters is all that keeps him from becoming the sixth player to have won all four majors.

"I know if I play well, I'll give myself chances to win this golf tournament," McIlroy said. He gets off to a late start, the final tee time of the opening round at 2:03 p.m.

Woods will be long gone by then, and that's when everyone will have a sense of how he can perform, walking and playing and keeping score for the first time in 508 days.

His concern is more about walking on a right leg that still has plates and rods and screws than making solid contact and holing a few putts.

"It's up to me to endure the pain and all that, but I felt like I could still do this," Woods said. "I don't know how many more years I can do this."

However many, everyone will be watching, now more than ever.