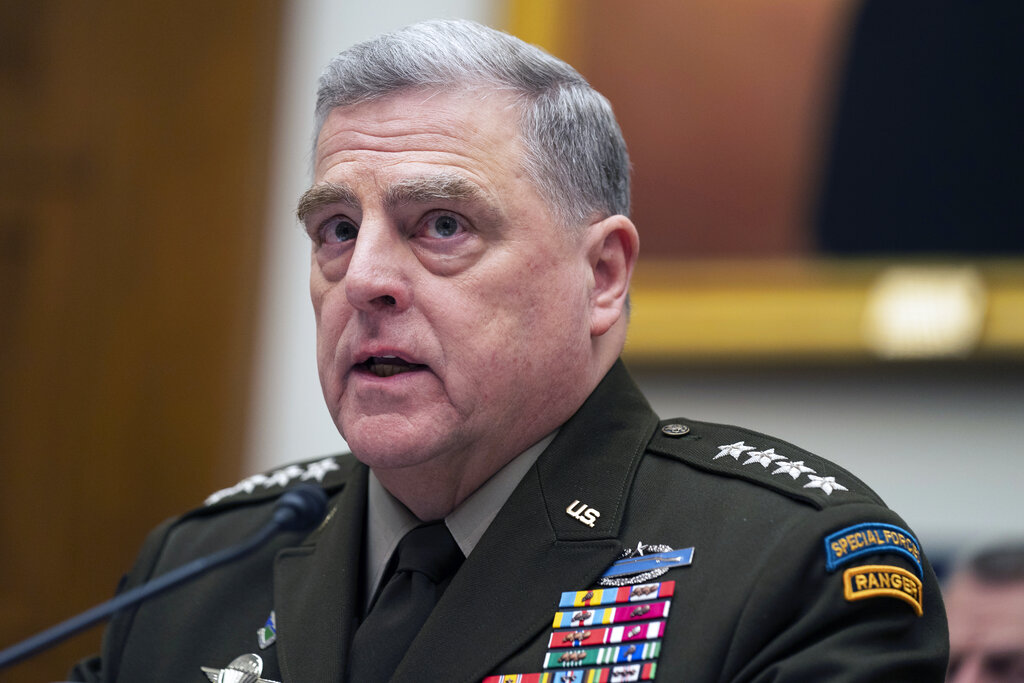 The United States should look at the development of more bases in Eastern Europe to protect against Russian aggression, but rotate forces through them rather than make permanent deployments, the top U.S military officer told Congress on Tuesday.

Army Gen. Mark Milley, chairman of the Joint Chiefs of Staff, said the basing could be funded by other countries such as Poland and the Baltics that want more U.S. troops. Defense Secretary Lloyd Austin said any effort to expand security in Eastern Europe is a "work in progress" that probably will be discussed at the NATO summit in June.

Milley and Austin were testifying before the House Armed Services Committee on the 2023 budget proposal, but much of the focus of the hearing was the Russian war against Ukraine and what the U.S. can do to better help Ukraine and strengthen security across Europe.

Milley was asked about the need to reallocate forces to Europe's eastern flank, where NATO allies are worried that they may be Russia's next target.

"My advice would be to create permanent bases but don't permanently station (forces), so you get the effect of permanence by rotational forces cycling through permanent bases," he said. "I believe that a lot of our European allies, especially those such as the Baltics or Poland and Romania, and elsewhere — they're very, very willing to establish permanent bases. They'll build them, they'll pay for them."

Austin added that he recently visited and spoke with leaders in the Baltics, noting that they made it clear they value U.S. troops there. "We'll continue to work with NATO to assess what the requirements will be moving forward," Austin said. "We will be part of that solution."

The Pentagon is continuing to review its troop numbers across Europe, and whether to add more or shift some of those already there to other locations. Milley said Tuesday that while there are no decisions yet, there's a possibility, if not a probability" of increase U.S. troops in Europe, and that need could be filled by rotational forces.

Milley has advocated using rotational forces more around the globe to defray the costs of permanently stationing troops and their families in allied countries at risk of war, such as South Korea and in the Persian Gulf. He said using this would eliminate some of the costs associated with schools, housing and other such services.

Milley also agreed that Moscow's aggression in Ukraine, and its ongoing demands that the U.S. and NATO reduce troops and arms in European countries along Russia's borders, signal a lengthy conflict in the region that extends beyond Ukraine.

"I do think this is a very protracted conflict and I think it's at least measured in years. I don't know about decades, but at least years for sure," said Milley. "I think that NATO, the United States, Ukraine and all of the allies and partners that are supporting Ukraine are going to be involved in this for quite some time."

Austin added that the broad Russian demands were not acceptable to NATO, and the U.S. is looking at ways to provide additional aid and training to countries, including non-NATO allies such as Georgia and Finland.

Members of Congress pressed Austin and Milley on what could have stopped Russia from invading Ukraine, and that sanctions did not work as a deterrent.

Both said that the only possible way to deter Russian may have been to put U.S. troops on the ground inside Ukraine, but that option was rejected because it risked a broader U.S. war with Russia. Milley said he isn't sure Russian President Vladimir Putin was deterrable since invading Ukraine has been a long-term goal for Moscow.

Milley and Austin also told the committee that the U.S. has learned a number of things as it has watched Russia struggle to fight against an unexpectedly fierce Ukrainian defense over the past month. They said Russia has significant military capabilities but has been unable to use them effectively.

Austin said Ukraine has used Stinger and Javelin missiles effectively against Russian troops and weapons. Milley said that Ukraine's junior officers, many trained by the U.S., have shown initiative and good command and control abilities.