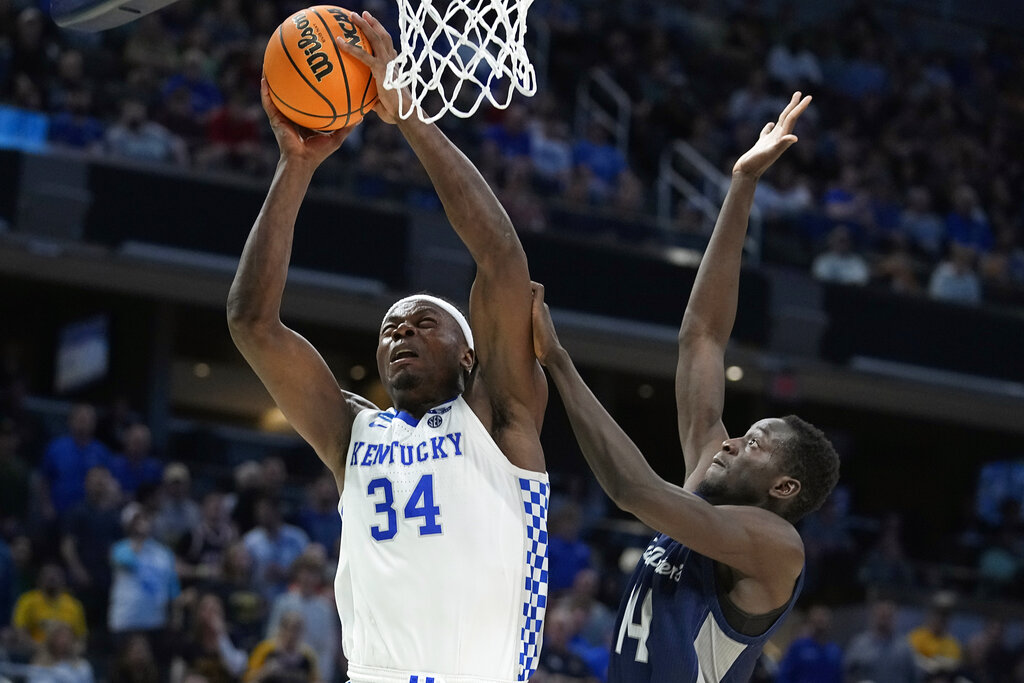 Kentucky forward Oscar Tshiebwe (34) drives to the basket ahead of Saint Peter's forward Hassan Drame (14) during the second half of a college basketball game in the first round of the NCAA tournament, Thursday, March 17, 2022, in Indianapolis. (AP Photo/Darron Cummings)

Oscar Tshiebwe of Kentucky won the John R. Wooden Award as the men's college basketball player of the year.

Tuesday's announcement from the Los Angeles Athletic Club was made on ESPN's "SportsCenter."

Tshiebwe led the nation with 515 total rebounds and 15.1 rebounds per game. The 6-foot-9 center had the most rebounds in a season since 1973 and the highest per game average since 1980. Kentucky was beat in the first round of the NCAA Tournament by St. Peter's.

Tshiebwe, who is from Congo, is the second Kentucky player to win the award, joining Anthony Davis in 2012. Tshiebwe also collected player of the year honors from The Associated Press, Naismith Memorial Hall of Fame, the National Association of Basketball Coaches, The Sporting News and the U.S. Basketball Writers Association.

The other finalists were Ochai Agbaji of national champion Kansas, Johnny Davis of Wisconsin, Iowa's Keegan Murray and Drew Timme of Gonzaga.

Tshiebwe and Boston have been invited to Los Angeles for Friday's 46th annual presentation.

Voting took place from March 14-21 during the early rounds of the NCAA Tournament by a national panel of voters who cover the sport and former winners.