Bluejays Travel to NC for First Ever Sweet 16 Trip 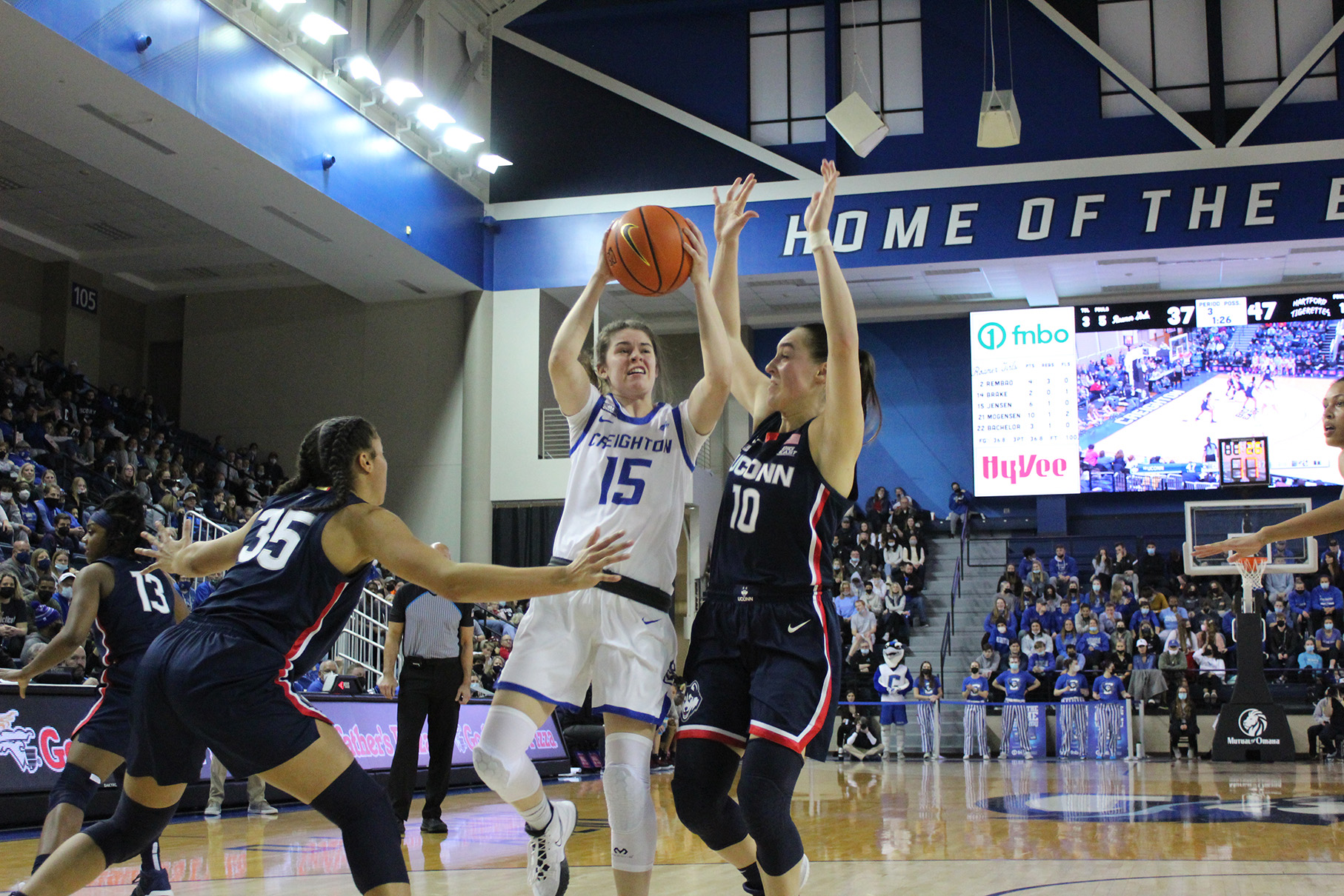 Creighton's Lauren Jensen goes up for a lay-up in a game earlier this year. (Justin Kies - NSN Sports)

The Creighton Bluejays women’s basketball team booked its program’s first-ever ‘Sweet 16’ NCAA Tournament appearance last Sunday with a stunning 64-62 win over the No. 8 Iowa Hawkeyes and will now face the No. 10 Iowa State Cyclones on Friday in Greensboro, N.C.

Creighton (22-9) notched their Sweet 16 birth after a hard-fought game in which neither team shot over 36 percent from the field. Sophomore Lauren Jensen secured the win with a go-ahead 3-pointer with nearly 10 seconds remaining against her former team to lift the Bluejays to program history. Jensen will appear in two-straight Sweet 16’s after last year’s freshman stint at Iowa.

“Yeah, storybook for the two people to my left [Lauren Jensen and Payton Brotzki],” said Creighton head coach Jim Flanery after the win on Sunday. “For Lauren to do what she did today… those last few minutes had to be magical and special, and we’re super proud of her and we’re super proud that she’s a part of our program.”

The No. 10 seeded Jays will now turn their attention to the No. 10 nationally ranked Cyclones from Iowa State (28-6). The two teams have met 23 times in their programs’ history with the last meeting ending in a Cyclone win in Omaha in 2008. Iowa State also boasts a 16-7 advantage over the Bluejays, winning the last 10 in a row. However, the two squads have never met on a neutral floor – until they play Friday night.

“They’re a really skilled team, really efficient on offense,” said Flanery on AM 590 ESPN Radio Tuesday afternoon. “I think defensively they’ll be really solid, they’re not going to get out and pressure you but they’ll know what our strengths are and will be detailed in how they play.”

Assuming that’s the case, it will be tough sledding for the top scoring Bluejay duo of forward Emma Ronsiek and the sharp-shooting Lauren Jensen. Ronsiek averages north of 14 points and five rebounds per game while Jensen pours in 12.6 points and four boards.

However, Creighton’s offensive efficiency is incomparable which is why they’re so dangerous – their scoring can come from anywhere on the floor. The Bluejays lead the nation in two vital offensive categories, assist to turnover ratio (1.59) and assists per game (20.5). They also rank second nationally in total assists with 636. Flanery believes their spread-it-out and let-it-fly offense is what makes them such a difficult out.

“We also feel like we’re a little different than a lot of teams,” Flanery said. “We run more of a motion offense and have a post that can shoot 3’s… I think that can help us in [this] tournament situation and short turnaround. But we’ll have our hands full. They’re a really good team and have really good guard play and a second team All-American in Ashley Joens who averages about 21.”

“I expect a close game,” Flanery said. “I expect us to have to win it in the end if we’re [going to] win it… [I have] great respect for their program. They’ve been really in the top 15 all year… But there’s some things I feel like we’ll be able to hopefully take advantage of.”