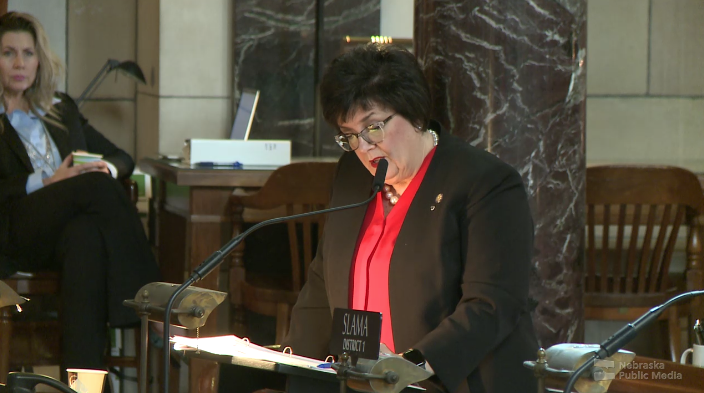 After an exhausting and emotionally charged debate, LB933 failed to advance Wednesday evening. The Unicameral spent a full eight hours debating the bill. LB933 introduced by Senator Joni Albrecht (Dist. 17 - Thurston) would have implemented changes in Nebraska’s abortion laws if Roe v Wade is overturned later this year by the Supreme Court.

A large number of activists against the bill were on hand throughout the day which included a rally in the rotunda. Those opponents found themselves on the winning side of the debate after cloture motion to end debate fell two votes short.

The debate sparked some heated and personal rhetoric. The pro-life senators asserted moral claims along with discussing alternative options to abortion, the nature of abortion procedures and definitions of life. A day-long filibuster fronted by Senators Megan Hunt, Machaela Cavanaugh, Patty Pansing Brooks, and Jen Day included objecting to the pull motion that brought the bill to General File, detailed legal questions, criticisms of not supporting social welfare past birth, and assorted moral objections.

Hunt called the Senators supporting the bill “extreme Christian activists.” The remarks were responded to at different times throughout the day by Senators Joni Albrecht, Suzanne Geist (Dist. 25 - Lincoln) and Lou Ann Linehan (Dist. 39 - Elkhorn). Albrecht said she believed Nebraska was a Christ-centered state, inferring the bill was reflective of the state population.

Geist explained her religious beliefs weren’t the only reason for supporting the bill. Linehan addressed the criticism saying, “I'm tired of being called or being referred to as a Christian extremist activist. But then I thought, maybe I'm not tired of it. I'm Christian. I don't like wearing it on my sleeve or trying to tell people what to believe. Yeah, I'm a Christian. And oh yes, I am an activist…Yep, I'm an activist. And you bet on this. I'm an extremist because we're talking about babies and we're talking about whether it's okay to abort them at 17 or 18 weeks when they have a face and arms and legs and a heart and that we would know that if they were born six weeks later, most of us I do believe would call murder.”

Senator Julie Slama (Dist. 1 - Sterling) talked of numbers and generational dynamics of the debate. “I'm 25. I'm ten years younger than any other woman on the floor and I'm proud to be pro-life. My generation, which has suffered the greatest losses from abortion, is the pro-life generation. Sixty-two million babies have been killed in abortion since Roe vs. Wade. Think about that for a second. That's an entire generation.”

Senator Michael Jacobson (Dist. 42 - North Platte) attempted to tamp down emotions during the debate telling his colleagues their differences weren’t personal in nature. The remark drew some criticism which Jacobson later clarified saying he meant that while everyone had deeply personal stories and emotions on the subject of abortion that he still felt respect for everyone in the chamber and would consider them all friends.

Senator Hunt responded later to Jacobson’s sentiment stating, “I will cherish the time that I have worked here forever. But when I am term limited, I will probably not talk to most of you ever again. That's just reality. You're not my friends. You're my coworkers. If you think my 11 year old should be forced to give birth you are not my friend. This isn't about the babies. This is about the words of this bill, and you chose the wrong bill.”

The vote on LB933 was 31 in favor of cloture [which would have ended the filibuster and allowed for a vote on the bill] and 15 opposed to ending debate, and three “excused not voting”.

Nate Grasz the Policy Director with the Nebraska Family Alliance told NSN after the vote, “Life is a human right. While a minority of pro-abortion senators, backed by organizations like Planned Parenthood and the ACLU who support partial-birth and dismemberment abortion, kept LB933 from advancing, our pro-life message of empowering women and embracing life will continue to advance. We are closer than ever to ending the injustice of abortion and will work tirelessly until every life is cherished and protected in Nebraska.”

Tom Venzor of the Nebraska Catholic Conference shared his thoughts, “It's a sad day for Nebraska. A small and vocal minority blocked Nebraska law from recognizing the dignity of preborn babies. But the fight for life is not over. The pro-life movement is winning hearts and minds. LB933 will return to the Nebraska Legislature and will soon enough become law." -30-