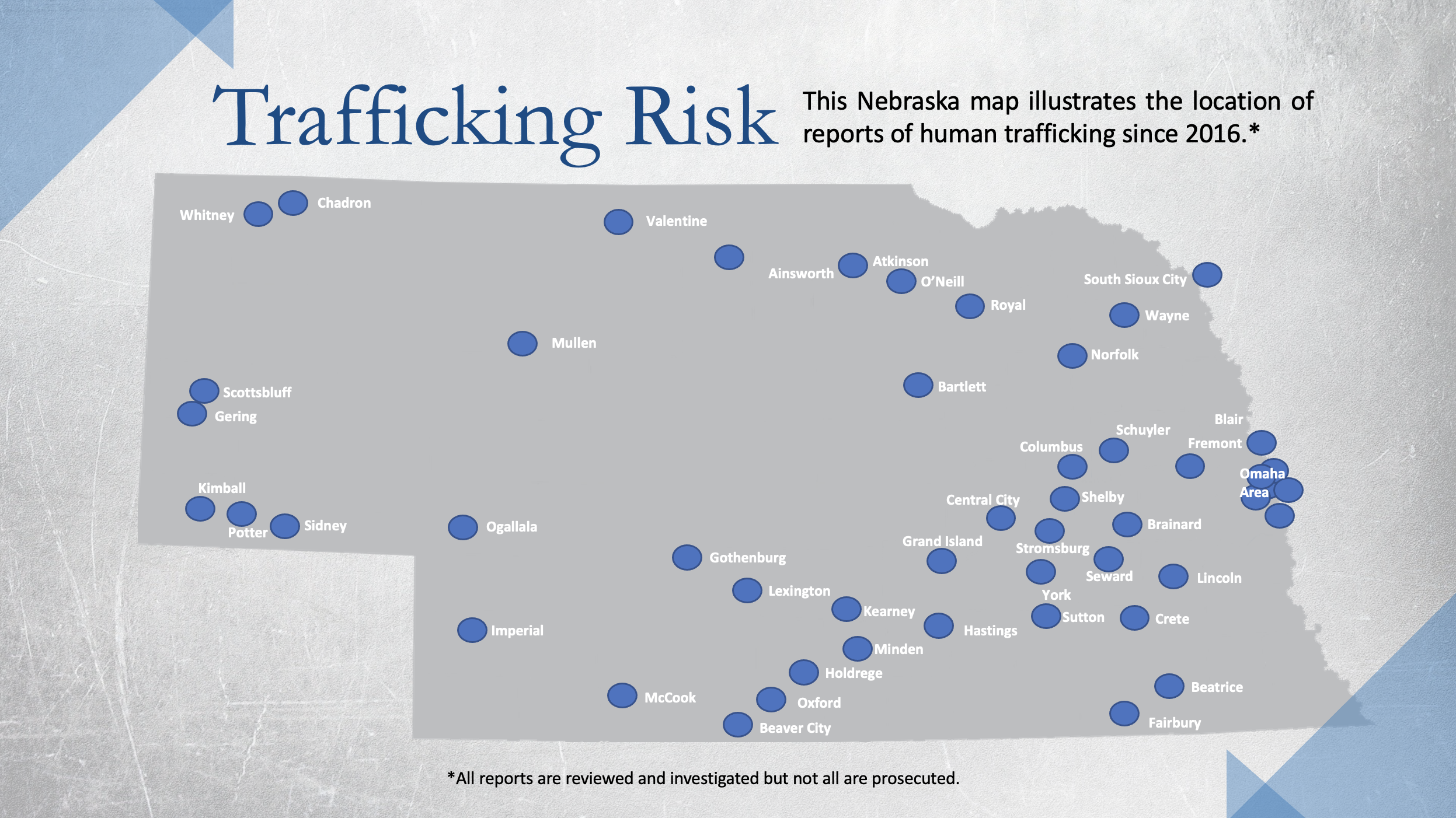 Part two in a five-part series on the undisguised realities of human trafficking.

You might think that human trafficking occurs primarily in large cities. Would it surprise you to know that it happens in every state, including small communities across Nebraska?

According to the U.S. Department of State, about 25 million people are victims of human trafficking worldwide at any given time. Victims are adults and children of all ages with different backgrounds, nationalities and immigration statuses.

Reliable statistics are difficult to obtain. The nature of trafficking, difficulty identifying victims, reluctance of victims to come forward, and complications of sharing information among governmental and other service entities make this problematic.

The state prosecuted its most significant sex trafficking case last year in which a male human trafficker from Oxford, was convicted for sex trafficking a minor. He was sentenced to a minimum of 176.5 years in prison. At least 18 other men have been charged in connection with this ongoing case. Also last year, an unrelated case in Brainard, a town with 420 people, resulted in a sex-trafficking prosecution.

How can you recognize a potential sex trafficking victim? The Task Force has identified several signs. These include having expensive clothes or things a person wouldn't usually be able to afford, large amounts of cash, and unusual or frequent travel. Commercial sex is generally a cash business and often happens in hotels. A person having multiple hotel key cards may be cause for concern.

There are other signs specific to children. These include a considerably older boyfriend or girlfriend unknown to parents and school friends, frequent unexplained absences from school, and tattoos. Some traffickers use tattoos or branding to show ownership. This branding is part of the psychological control to dominate the victim. They manipulate them into thinking they’re nothing more than a way to earn money for the trafficker. When the same person is trafficking multiple victims, the victims may have the same tattoo. Children missing from care, or runaways, are at a significantly higher risk of being trafficked. These children are easier targets for traffickers to exploit without drawing too much attention.

Signs of labor trafficking may include owing a large debt, low or no wage, inappropriate wage deductions, unnecessarily high security measures, inability to freely quit their job and living or sleeping at work. Foreign nationals are often victims of this type of trafficking and may be prevented from accessing their identification documents such as a passport.

Human trafficking victims are often hidden from view. However, there are times they may be right in front of you. If each of us learns what to look for, we can help potential victims by reporting suspicious activity. -30-

If you suspect human trafficking and are not law enforcement, do not confront the trafficker. Doing so could put you and the victim in danger. If a trafficker thinks you suspect them, you may jeopardize law enforcement's ability to investigate the situation further and help the victim. If you suspect someone is in immediate danger, call 911. If you suspect trafficking, but it is not an emergency, call the National Human Trafficking Hotline toll-free at (888) 373-7888. The hotline is available 24 hours a day, seven days a week, every day of the year. The organization received over 10,500 reports of suspected trafficking situations and identified over 16,000 victims in 2020 alone.