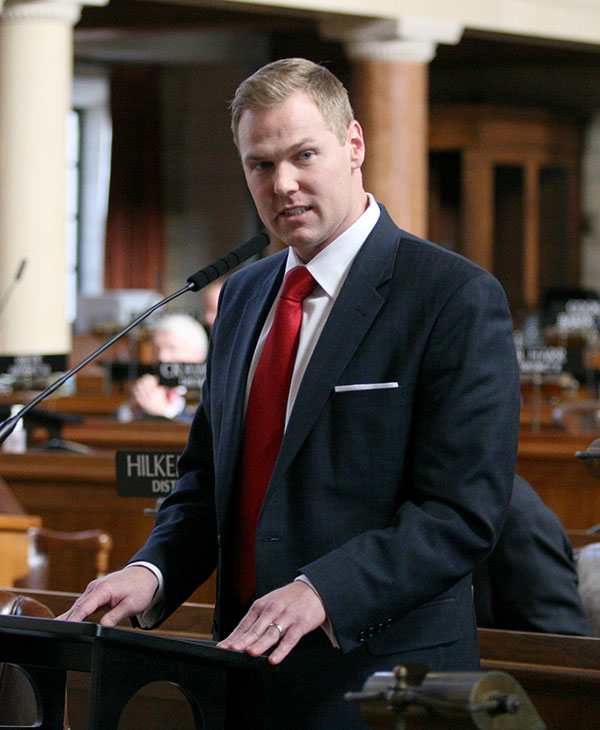 The legislature advanced a bill to Select File that would cut property taxes. Amendments to Senator Curt Friesen’s LB873 changed the bill to include provisions from Senator Brett Lindstrom’s priority bill which phases out social security taxes and cuts property and income taxes. Originally the bill was Friesen’s priority bill to address levy authority for community colleges.

“And to me, it stimulates the economy,” he said. “It gives people more money and puts it in their pocket.”

Lindstrom (Dist. 18 - Omaha) spoke of Nebraska’s competitiveness in the region and made the comparison of state policy working as a business.

“I often look at places like Utah or South Carolina or places who have taken those steps for better taxes,” Lindstrom said. “They have the most economic activity. South Dakota is in the top three for the most migration from the state of Nebraska. So we're trying to compete with those states. The workforce ties this all together. This is about making sure that we're keeping anybody in business, and keeping your clients and customers happy first. And then you can go out and start to recruit, you can start to get more clients and customers. It's no different than what we're doing as a state.”

Senator Lou Ann Linehan (Dist. 39 - Elkhorn) referenced several studies during the debate. “If you look at the map from the Tax Foundation, [titled] ‘How High Are Property Taxes In Your State’ you can see that we're in the darkest of dark colors because as we all know, they're very high. I also note that some of the states that are very high don't have income taxes. So we're talking about a situation where we have very high property taxes and high income taxes, and we tax Social Security. This is not a good situation. And finally, on the Kiplinger Tax Map, they tell anybody who's retired not to live in Nebraska. Why? Because we tax your Social Security, and we have some of the highest property taxes in the country.”

Senator Wendy Deboer (Dist. 10 - Bennington) described the benefits of the bill as nothing but a “pizza party.”

“If you're sitting at home and you're watching this and you're saying, I'm hearing one thing from one group and another thing from another group. Here's what I'll say. Figure it out yourself. So look at your taxes, look at your tax return and imagine what happens if the top bracket only goes down one percent and see if you get any, or very much, or if you just get a pizza party. Look I like pizza, I had some for lunch. So maybe that's enough, but see what you get with this patch as it is by only lowering the top tax bracket one percent. That's my concern.”

Before the final vote on the bill Senator Lindstrom described how the bill would work, “This will take the ten-year phase-out and we will end the tax on Social Security in 2025. This year for the taxable year 2022 it'll be 40 percent. By 2023 it'll be 60 percent. In 2024 will be 80 percent. And then we will get rid of it completely for good in 2025.”

The bill with the added amendments took seven individual votes before advancing. The final vote to move LB873 to Select File was 44-0 with three “present not voting” and excused not voting”. The three present votes came from Raymond Aguilar, Machaela Cavanaugh and Matt Hansen. The two excused votes were from Adam Morfeld and Rich Pahls. -30-