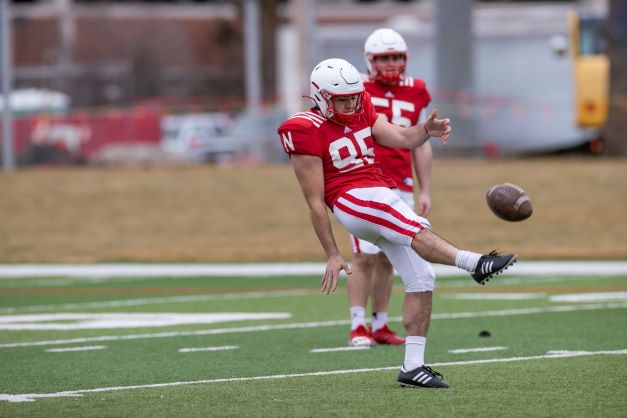 Brian Buschini put one foot in front of the other and found his way to Nebraska. Nebraska special teams coordinator Bill Busch couldn’t have asked for a better early Christmas present as the nation’s top punter at the FCS level wanted to wear Husker red.

If you go just by the numbers, Buschini figures to be the hands-down choice to become Nebraska’s new punter. Buschini played in 15 games at Montana, averaging 45.8 yards on 75 career punts. He had 30 punts of 50 yards or longer while placing 35 of his 75 punts inside the opponent’s 20-yard line. Buschini also handled kickoffs for Montana, recording 35 career touchbacks.

Last season Husker punters William Przystup and Daniel Cerni combined for 48 punts for an average of just over 40 yards per punt. Neither player is currently listed on Nebraska’s roster.

Buschini started all 13 games for the Grizzlies as a redshirt freshman in 2021, winning the FCS Punter of the Year from the Augusta Sports Council, which is home to the Ray Guy Award, given to the best FBS punter.

Buschini ranked third nationally with an average of 46.0 yards per punt in 2021, and he helped Montana lead the nation in net punting average. He punted 69 times in 2021 with 30 punts downed inside the opponent’s 20-yard line and 58 punts covering 50 yards or longer.

Montana did not play in the fall of 2020 due to the pandemic and played only two games during an abbreviated 2021 spring schedule when Buschini averaged 43.3 yards per punt, placing five of his six punts inside the opponent’s 20-yard line. Buschini says that he does have a bit of a chip on his shoulder and wants to prove that he belongs at the major college level.

“At a program like this, there is a little bit more pressure … so if I can come in here and be an outstanding guy on and off the field and hopefully perform to the level that I’ve fortunately been able to in the past, we will get some good compliments coming in from that.”

Buschini also realizes he’s not in Montana anymore and Nebraska has welcomed him and his wife with open arms.

“You can just tell that there’s ultimate support here. My wife and I have been super blessed with people reaching out to us and facilitating needs that we had coming into this process.

Brian Buschini credits the additional coaching he received from his own personal coaches in Alabama at One-on-One kicking for helping him to reach his potential with this opportunity at Nebraska.

“My coaches at One-on-One kicking are the best dudes in the world. I had a chance to fly down to Alabama and train with them last week over spring break. (They) help me with my tune-ups, helps me change my technique, and the more I can work with him, the more confident I feel. Coach Busch has a relationship with those guys too so there is constant communication. They are all on the same page. Coach Busch knows what to expect out of me and knows how to coach me well.”

Besides great coaching and an opportunity to play on the big stage, Brian Buschini hopes that he can get a few NIL opportunities to help pay for his wife’s schooling. He’s already received an offer from a local dentist to, as he describes it, “kick away” tooth decay.

As for his performance on the practice field, Brian Buschini didn’t get off to the start he was hoping for but has seen steady improvement recently and he really likes the competition he’s up against at Nebraska.

“I’m really excited here at Nebraska. There’s more guys so we’ve got more competition at the punting spot, so it just pushes me each day to get better and better. Putting in extra time to work for the guys to my left and my right.”

Bill Busch loves the maturity of his newest weapon on special teams.

“He has a very good even demeanor which you have to have because not every kick is perfect. So, you have to be able to have a short memory, very impressed with his work ethic.

All that’s left now is for Brian Buschini to keep putting one foot in front of the other elevating Nebraska’s special teams. -30-