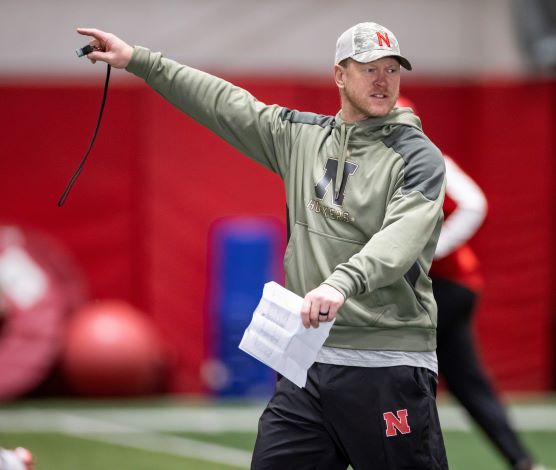 Nebraska head coach Scott Frost held his final press conference this week prior to the spring game on Saturday at Memorial Stadium. Overall, Frost is pleased with what’s been accomplished this spring, but does admit that there is still some work to do before his team is ready for an actual game.

“We have gotten a lot better at a lot of things," Frost said. "There is still some things I am not happy with that need to get cleaned up. That is spring ball in a nutshell. We just need to execute a little bit better. We are doing some simple things a lot better. Spring has been fun. There has been a lot of guys bringing good energy. We are missing quite a few guys that are going to be key contributors and it will be nice to have them back, but I think a lot of guys got better over the course of spring."

Frost emphasized that the starting quarterback position will not be decided during Saturday’s spring game. Frost says that the coaching staff will make an informed and appropriate decision when the time comes. Frost did not set a timetable for the decision. For now, Frost and his assistants want to see even more consistency from the quarterback position.

“We are doing some really good things at times. In this league you are not going to score a lot unless you can be consistent and sustain some drives and create some big plays along the way. To get opportunities for big plays you have to be consistent and keep moving the chains and I think that is really important in the Big Ten."

Frost also intimated that there may be a new structure for this year’s spring game due to the number of injuries that occurred this spring. The format would consist of an offense versus defense scenario with a unique scoring system, but a final decision on the format of the game has not been made.

For many, the spring game represents the first real opportunity to see what Husker football will look like in 2022.

The opportunity to make a good impression is not lost on Frost, especially when the subject of recruiting is mentioned.

“Any chance we get to get recruits on campus is a win for us," Frost said. "I think we are scheduled to have quite a few good ones here Saturday, so we are looking forward to it. It turns it into almost a fall game day where we have to host some guys on unofficial visits and some visitors and that makes it exciting. We love our fans and the enthusiasm around Husker football, and we want recruits to get to see that as many times as possible." -30-