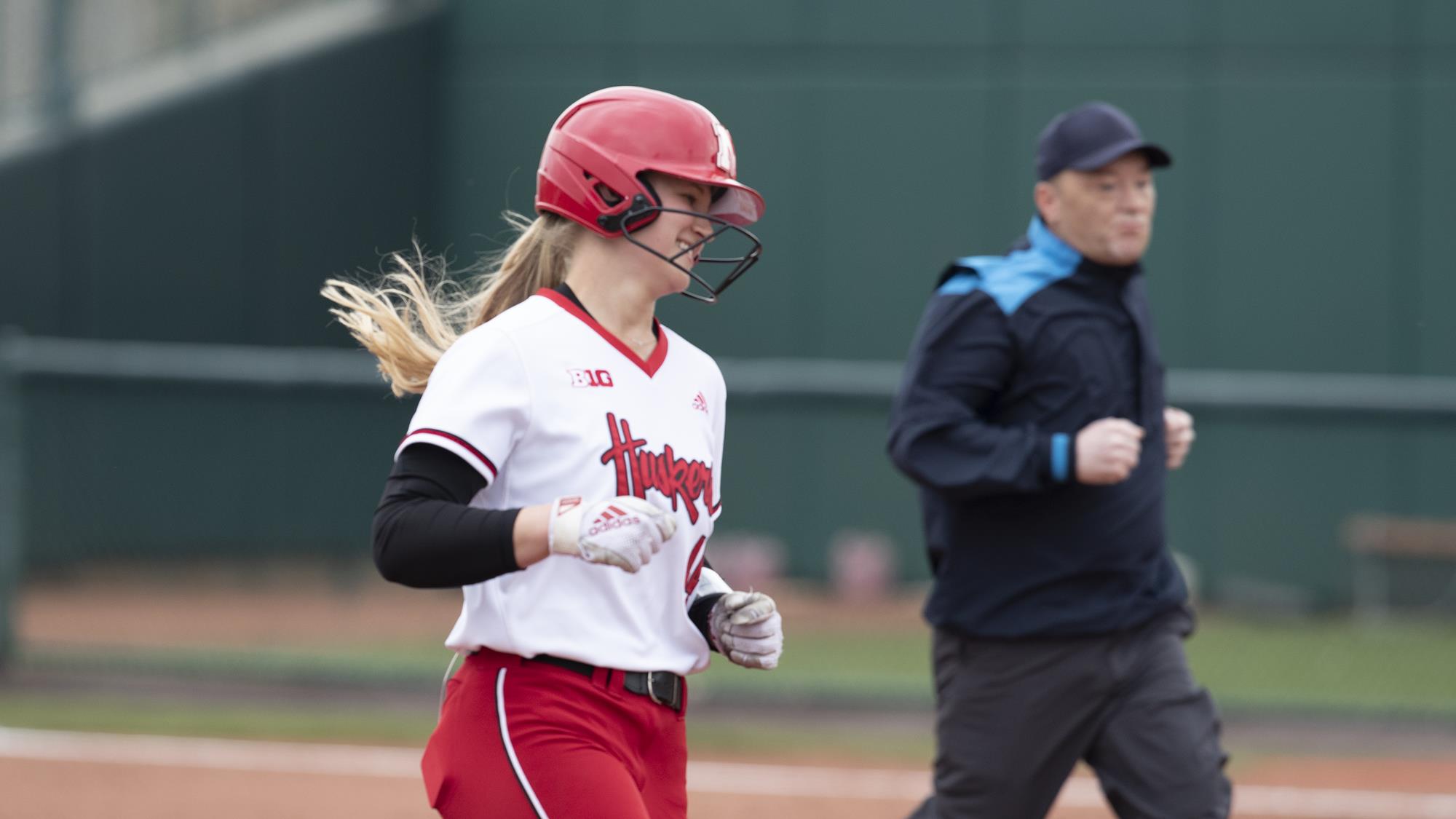 Nebraska's Kaylin Kinney rounds the bases against Rutgers on Sunday at Bowlin Field in Lincoln. (Photo courtesy of Husker Athletics)

Kinney pitched all five innings, only allowing one hit, while recording four strikeouts.

“She has been working hard in our bullpen,” Nebraska head coach Rhonda Revelle said. “Her pitches have always had quite a bit of movement. She has been working on locating. Seeing her today was fun to watch. We’ve had her come into the game in relief situations, but this is just her second start. The fact that she had a complete game, one hit, shutout is outstanding.”

Rutgers decided to use the same pitcher – Ashley Hitchcock – that pitched in yesterday’s defensive battle. It’s an understandable decision after she had a good outing and that was the lone bright spot for the Scarlet Knights all series.

“We had a feeling we would see her [Hitchcock] again today because she did a nice job against us yesterday,” Revelle said. “We had a film session before we went to hit this morning, we made some adjustments and did a good job against her and when Vickers came in, we were able to score off her too. Anytime you can score off relief pitchers quickly, that’s always a good sign as well.”

Nebraska’s offense did most of its damage in the second and third innings. Kinney got the bats going with a three-run home run in the second.

“I didn’t think it was going out at first but once I saw the flight on it, I had a feeling it might make it [over the fence],” Kinney said. “After I saw it go over, I was hyped and told my teammates, ‘let’s go, let’s put some more runs on the board.’ Winning this home series in front the fans felt amazing.”

In the third Nebraska posted five runs. Mya Felder got things started by blasting a two-run homer to left center, making the score 5-0.

That score ended Hitchcock’s day, and Jaden Vickers took the mound in relief for Rutgers. Even with the pitching change, Nebraska had an answer for everything Rutgers threw at them.

Kinney earned her fourth RBI with a single to right field. Moments later, Cam Ybarra capped off the third inning with a two-RBI single, plating Kinney and Peyton Glatter. Billie Andrews tried to score on the play as well but was tagged out at home to end the inning. Even with the out at the plate, Nebraska’s lead had ballooned to 8-0.

The Huskers added an insurance run when Rutgers failed to turn a double play. The Scarlet Knights shortstop – Kyleigh Sand – rushed the throw to first base, allowing Camyl Armendariz to score from third on the error, accounting for the final score of 9-0.

“Today was a complete game. Everything was clicking and that’s really nice to see on day three of a series. You don’t see that a lot in the final game of a series,” Revelle said.

Nebraska returns to the field in East Lansing for a three-game series against Michigan State starting Friday, April 8 at 5 p.m. The games following will be April 9 at 1 p.m., and April 10 at noon.

The Huskers will have a rest advantage as the Spartans play two midweek games prior to their weekend matchup. Michigan State hosts Oakland on Tuesday and is at in-state rival Michigan Wednesday. -30-