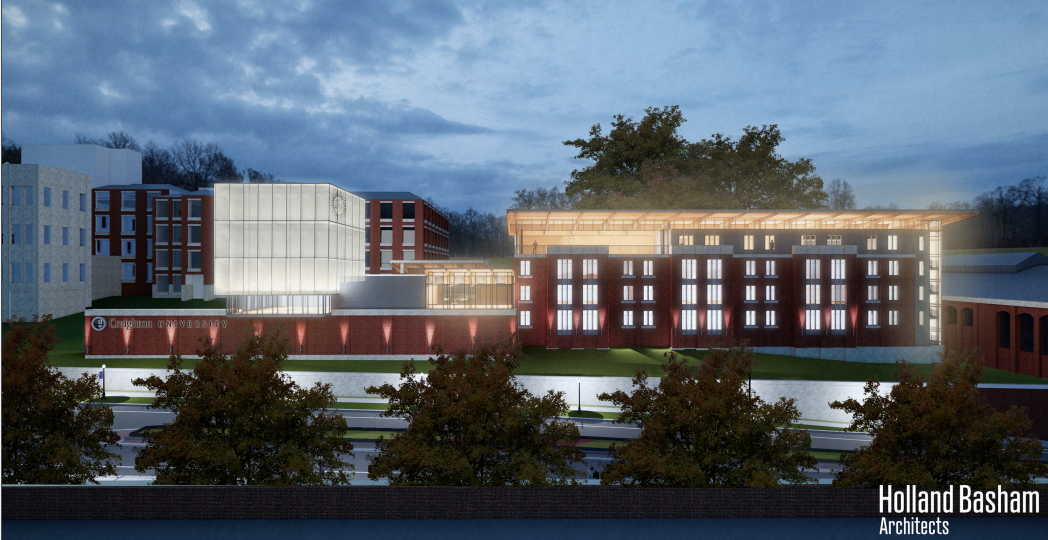 A new donor-funded Jesuit Residence at Creighton University will make the Jesuit Community more visible and available to students, faculty, staff and the city of Omaha.

Expected to open in fall 2023, the Jesuit Residence will stand along 24th Street at the east end of the historic Jesuit Gardens, behind Creighton Hall and St. John’s Church. Site work will begin in April 2022.

The residence will house Jesuits, many of whom live, serve and work on campus as instructors, pastors, chaplains and University administrators and staff. The 37,779 square-foot building will be accessible to students, faculty, staff, alumni and Omaha partners for Mass, spiritual counseling and other mission-based programs.

“Students and campus visitors often tell me that Creighton University ‘feels like home,” said University President the Rev. Daniel S. Hendrickson, SJ, PhD. “One of the main reasons they feel at home here is the Jesuit Community at the heart of our campus and our mission. The new space will underscore the life-changing role the Jesuits play in supporting our students and shaping educational experiences grounded in spirituality.”

The new residence will also support the Creighton Jesuits’ active presence in Omaha and the broader global Jesuit community.

Creighton will host area Jesuits at the facility for meetings and fellowship, including those at Creighton Prep, the Jesuit Academy middle school in North Omaha, Cloisters on the Platte and the Creighton Retreat Center in Griswold, Iowa. Jesuit scholars visiting from around the world will stay in the facility’s five guestrooms.

Additionally, floor plans include 29 bedrooms for Creighton Jesuits, as well as a 1,015 square-foot chapel, a dining hall, library and several spaces for spiritual activities.

“As a Jesuit institution, we feel an extra sense of obligation to serve our community and engage in the world in thoughtful and respectful ways,” Hendrickson said. “Our commitment to doing so has helped guide the vision for this facility. The residence will allow for renewed expressions of Jesuit presence, hospitality, prayer, conversation, spiritual direction and more.”

The residence will bring Creighton Jesuits — who have lived on campus since the University’s founding in 1878 — under one roof for the first time in decades.

Today, the Jesuits reside in Creighton Hall, the University’s oldest building, and at the aging Ignatius House, the latter of which will be torn down to make room for the westward growth of Creighton’s Jesuit Gardens.

The University will likewise remove the Creighton Observatory. Constructed in 1886, the observatory has been closed for decades because of safety concerns. As part of the project, portions of the observatory will be preserved and incorporated into a memorial structure in the Jesuit Gardens.

The total cost for construction of the Jesuit Residence, demolition of existing structures and renovations to the Jesuit Gardens is approximately $17 million and is supported through donor investments.

The project is part of the Forward Blue campaign, which embraces Creighton’s Jesuit identity and emphasizes support for scholarships, programs, services and spaces across the University’s campuses in Omaha and Phoenix.

“We are humbled and forever grateful to the donors who have made this possible,” said the Rev. Nicholas Santos, SJ, PhD, rector of the Jesuit community in Omaha and associate professor of marketing at Creighton. “They felt called to make sure that our vibrant Jesuit Community continues to thrive, serve others and guide students academically, personally and spiritually.” -30-