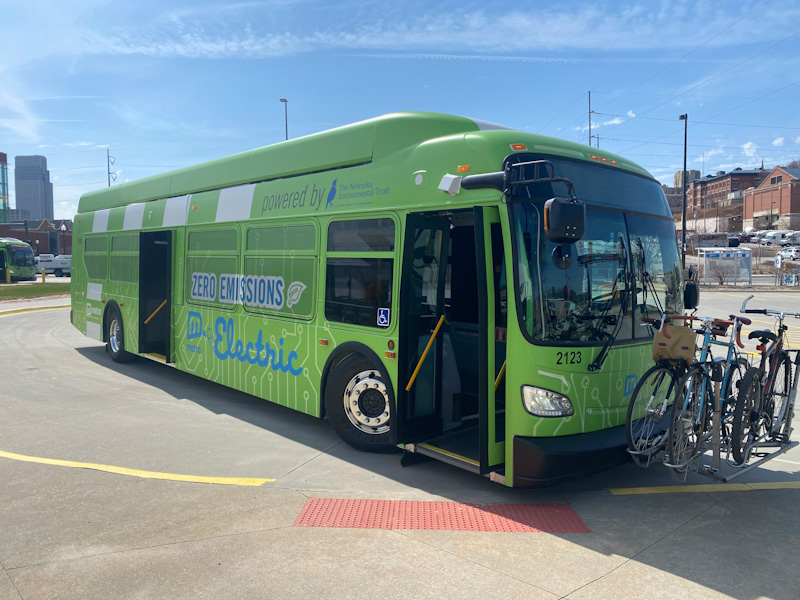 On Tuesday Metro Transit started its trial of electric buses by putting three on Omaha roads. They are the first all-electric buses in the region.

Metro CEO Lauren Cencic discussed the new buses. In the past few days she said drivers and passengers have mentioned it being a much quieter ride than diesel powered. Less noise leads to less bother to neighborhoods near bus routes.

The buses are 40 feet long and include a bike rack in the front that can hold up to three bikes. They cost $800,000 dollars each compared to the diesel buses costing $600,000.

The batteries have a warranty and will be replaced free of charge by the manufacturer, New Flyers of America, if they don't last the lifetime of the bus, an expected 12 years. The batteries are planned to be recycled after the buses are decommissioned.

The batteries consist of five smaller cells connected together and are designed to function even if one cell goes bad. The modular cells make it easy to detach and replace one.

The batteries take 3 to 5 hours to charge to full capacity and the charge lasts 8 to 10 hours.

Cencic said the buses are supposed to have less maintenance required than their diesel counterparts. Lacking the need for a combustion engine and a transmission, Cencic said the propulsion system is simpler and has less areas that can go wrong.

The first preventative maintenance won't be needed until 350,000 miles.

The pilot is Metro Transit’s first test for moving to a carbon neutral future.

“We are really looking at studying these buses and monitoring them to make a better long term plan,” said Cencic.

The electric buses, while not releasing any carbon, do draw power from the Omaha power grid which isn't net neutral.

The new buses are installed with a state of the art cleaning system that purifies the air and sanitizes surfaces as the bus drives. This cleaning system also kills COVID. -30-