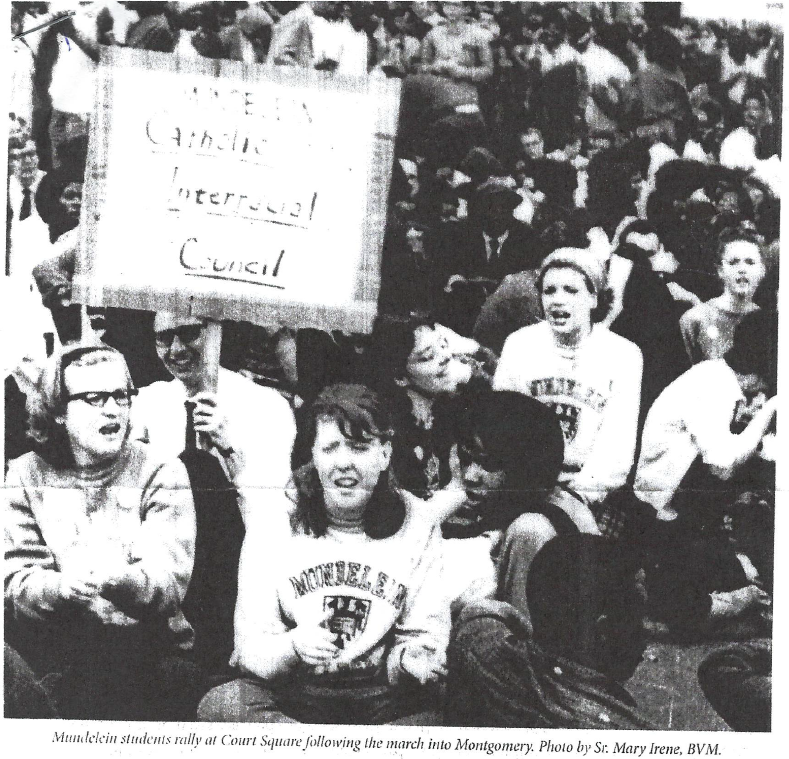 Today marks 57 years since the Selma to Montgomery march number three. I say march number three because many don’t know there were three attempts to march from Selma, Alabama to the Capitol in Montgomery to achieve voting rights for African Americans. The first was the infamous Bloody Sunday. Legal challenges defused the second attempt. The triumphant third attempt, led by Dr. Martin Luther King, Jr., radiated a glimmering light on America and her people. It also exposed her fouled, oppressive underbelly.

I recently had a wonderful experience talking with an eyewitness involved in the third march.

Bonnie Strabley, now Bonnie Strabley Kauth, was a college student at Mundelein College in Chicago. While it should not matter, Bonnie Strabley is a white woman. Along with 28 other students, eight faculty, a priest and a doctor, she made her way to Alabama in March of 1965.  Parts of our conversation follow:

Ben:  Bonnie, what was the reason or reasons that prompted you to take part in the Selma march?

Bonnie: “Mundelein is a Catholic school with a strong commitment to service. My mom and dad were much the same way. Integrity was important in their house as it is in my home too. I just felt like I had to take a stand. It was about fairness.”

Ben:  Describe the circumstances once your group reached Alabama.

Bonnie: “Once we crossed the Alabama state line, we were warned not to leave the bus.  Judging by the sneers of some of the people, it was a bit of good advice. In an orientation session we were told what to do in case of personal assault, horse attack or tear gas. It was one of the few times that I was really scared.”

Bonnie described how they made camp in a field a half mile outside of the town St. Jude, Alabama. They met up with several of the original 300 marchers involved in the Bloody Sunday incident. They stayed inside a fenced-in perimeter. No one was allowed outside the fence except for emergencies.

Bonnie continued, “Since Black people knew we were on their side they were especially eager to talk with us. Some of the women insisted on bringing us to their homes for dinner. They offered us their bathtubs to wash up. You know, Ben, it was one of those times I was afraid…not for me or the group I was with but the people who showed us such hospitality. What’s going to happen when we leave? They have to stay there and face the backlash for supporting our march.”

That comment struck me like a fist upside the head. In all my years of living with, covering and reading about that period I had never thought about what might happen to the people in those towns who supported the marchers. The idea of what may happen to those townspeople haunted Bonnie. Prior to the actual event, marchers were given instructions on how to march.

Bonnie: “We were told to link arms, to form lines of six abreast, and to have a man on each end of each line. We were told of “eye-ball contact.” This meant being aware of the people on the outside, but not acknowledging them. We were warned to expect jeers, dirty language and spitting. All of which we were told to ignore.”

After some down time and a few more briefings, the word to march was given. Bonnie said there were more police, state patrol and national guard troops escorting them than she had ever seen. The group of marchers had swelled to more than 25,000 by most estimates.

Entering Montgomery, marchers realized this was truly a tale of two cities. Cheers, smiles, tears and victory signs greeted and encouraged them while walking through the Black section of town. The White part of town was a totally different story. Though the marchers weren’t subjected to actual violence, they were greeted with what John Howard Griffen described as the “hate stare.”

When the marchers reached the Capitol, the streets were, for the most part, deserted. Marchers sang freedom songs, heard speeches and shared experiences. Dr. Martin Luther King delivered the keynote speech. Bonnie described King as a powerful speaker and an even better leader.

Once the programmed events ended, the crowd once again locked arms and sang what appeared to be their favorite of the freedom songs “We Shall Overcome.” Marchers were told after the march it was not a good idea to stay in Montgomery very long. Bonnie’s group quickly made their way back to St. Jude to gather their belongings for the trip back to Chicago.

I asked Bonnie to reflect on her experience.

Ben: “Given the fact that you had to deal with the rain, the mud, and the incessant danger around almost every corner, if you made one wrong move, would you do it again?” Before I could complete my question Bonnie chimed in.

Bonnie: “Absolutely. Only I would carry a much bigger sign and be a lot more vocal. We have to do better as people.”

Bonnie’s story serves as an example of the power of inspired and brave people taking extraordinary actions. History rings with the echoes of her efforts – and those of so many like her.

“There never was a moment in American history more honorable and more inspiring than the pilgrimage of clergymen and laymen of every race and faith pouring into Selma to face danger at the side of its embattled Negroes.” – Dr. Martin Luther King, Jr., addressing the crowd in Selma. -30-

Look for an exclusive NSN podcast with Ben Gray and Bonnie Strabley Kauth in the near future.

For a living historical document, see the pdf link below for the March 27, 1965 letter Bonnie Strabley wrote to her family describing the march and her experience.