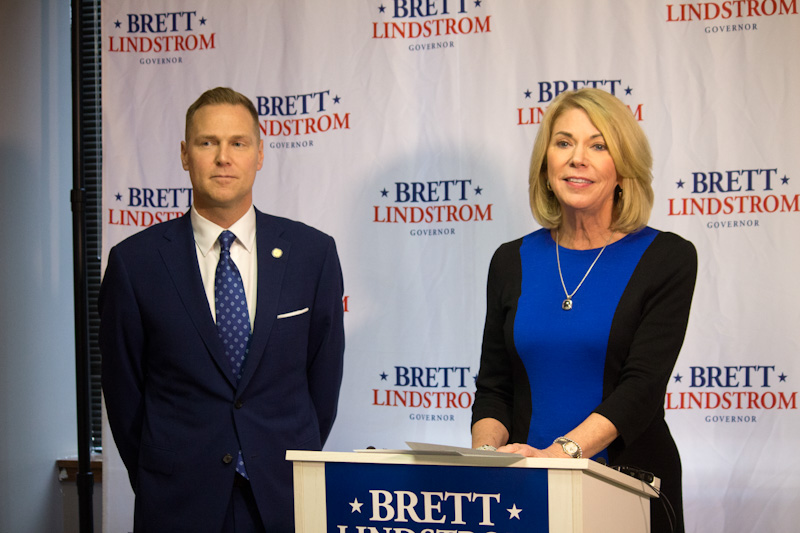 A plan, vision, economic development, tax reform, and a positive campaign are reasons Omaha Mayor Jean Stothert gave in her support of State Senator Brett Lindstrom who is seeking the Republican nomination for Governor. The announcement came Monday afternoon at the Lindstrom campaign headquarters. Stothert’s endorsement could provide critical momentum in the stretch run leading to the May 10th primary.

Stothert told the gathering of campaign staff and media, “Brett has the experience, the vision and the proven record to lead our state through the next phase. It is a strong and positive vision for our state and has leadership skills to make this vision a reality. We need to look no further than the role he has played in the last legislative session working to pass meaningful tax reform which is so important to all of us. He has led the effort to end taxation of Social Security benefits. And this is one of the key legislators spearheading LB873 which will provide property tax relief while reducing both the individual and corporate tax rates. That is the type of leadership [we need] in Nebraska.”

Stothert mentioned Lindstrom’s eight years of experience as a state senator as critical proving ground if elected governor. “I'm also impressed with Brett's ability to work with senators from across the state regardless of whether they're Democrat or Independent, urban or rural. That ability will serve him exceptionally well as governor.”

Lindstrom said he was humbled by the endorsement. “I would tell you the last four weeks we have really started to build a lot of momentum and this just adds to that momentum moving forward.”

Stothert was asked if she had been approached by other candidates in the race for their support. Stothert said she had met with Theresa Thibodeau and Jim Pillen. Charles Herbster only recently reached out to her. Stothert shared criticism of negative campaigning that has attacked Lindstrom. She praised Lindstrom’s positive approach as part of her endorsement.

Lindstrom jokingly said he saw one such attack the night before for the first time while watching “American Idol” with his family. Lindstrom said of the other campaigns, “No one will remember any of the negative stuff. We're gonna turn it into a positive. It just continues to separate us from the other people that are running. People like the mayor said people want to know about what you're going to do for the state of Nebraska: A positive message and talk about what we can do versus what we can't do. I'm gonna continue to focus on that and present that to people in Nebraska because it's what Nebraska people want to see.”

Some of Lindstrom’s colleagues in the legislature have issued their endorsements for those competing candidates. Lindstrom said he expected a few state senators to announce support for him as well. NSN asked Lindstrom if any of those endorsements had affected his legislative efforts or relationships inside the Unicameral? Lindstrom said, “Policy is the thing that will determine whether or not it's good or positive or negative with the people in Nebraska. I don't get caught up in who supports who. You're speaking of the tax bill that we're working on currently [LB873] looks like it's going to go [pass]. There's certain senators within that committee [Revenue] that have endorsed my opponents, but we're doing the right things for the people. I don't get caught up in that. It’s doing the right thing for the people that includes the Social Security tax, income tax cuts and property tax cuts. This will all sort itself out in 36 days. After that I'm sure that a lot of people will come on board with the campaign. I've never taken it personal or made it personal. It’s not my style.”

The May 10th primary is now 35 days away. Nebraska can count on seeing endorsements and advertisements hitting their TV, radios, and mailboxes in the next few weeks.

NSN will be covering all the endorsements as the final weeks of the primary heat up. -30-