Time to Get Defensive 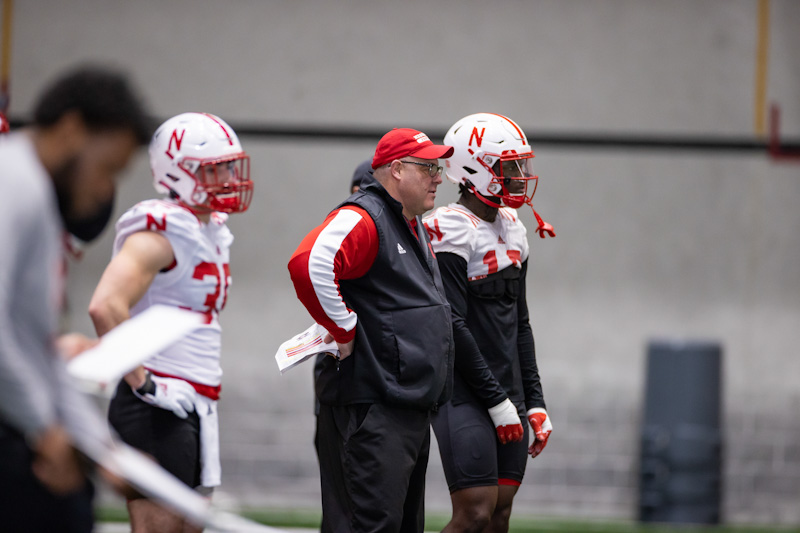 Mike Dawson watches from the sidelines in Lincoln on February 28, 2022 (Photo courtesy of Nebraska Athletics)

The challenge of creating an effective pass rush is one of the biggest goals for Nebraska this spring. Assistant coach Mike Dawson is busy trying to find the right combinations at the outside linebacker position and the interior defensive line spots in order to make it all come together on game day.

Recently after the conclusion of Nebraska’s second scrimmage he shared how becoming educated about the defense and putting the work in makes all the difference in the world. It shows who is truly paying attention.

“It’s all about habits,” Dawson said. “How you make sure that they are all attending class or all going to meals or all doing whatever they’re supposed to do when they’re supposed to do it. That translates to me, when suddenly Chins calls something besides a base defense and we have to move away from pressure, how do you know they’re going to do it? This same guy has been to all of his classes, goes to every meal, hasn’t missed anything, usually that guy does a good job of making sure he doesn’t miss an assignment. And the converse is true. All of a sudden a guy hasn’t shown up for class or he's missed meals, when he goes out on the field, he’s probably going to be a sometimes guy. Sometimes he gets it right, and then sometimes he is in the wrong gap.”

When asked to grade defensive line to this point in spring practice Dawson simply said, “It’s a work in progress.”

Nebraska defensive coordinator Eric Chinander believes there has been progress, but he still needs to see more from his young defensive line prospects.

"I think we are comfortable with the players," Chinander said. "It is just that we have got to see some separation. Some of those guys have got to go earn that spot."

One of the players trying to earn “that spot” is 6-4 325 pound Nash Hutchmacher. He appeared in 12 games last season for the Huskers. Hutchmacher loves the weight room and Dawson can’t wait for him to put it all together on the field.

“The key for Nash is to put all those numbers that he has, he can bench press this much, and squat that much and power clean this much. Now can you do all those three movements at once and bring that over to the football field? For him that’s the big challenge.”

Chinander doesn’t mince words when trying to explain to Cornhusker fans or any football fan, the necessity of a good pass rush. It can literally be the difference between winning and losing.

Dawson says don’t be surprised when Nebraska shows up in a 3-4 look because he has multiple options at nose tackle with the likes of Ty Robinson and Hutchmacher just to name a few. It’s all dependent on what the opponent does week to week.

For Nebraska fans who believe that the Cornhuskers should just go find defensive line help in the portal, Dawson has a word of caution. Unlike the quarterback position where many teams have reloaded, Mike Dawson said it’s much harder to use the transfer portal as a means of obtaining talent for the defensive line. In other words, a good defensive line prospect doesn’t just grow on trees, but the portal does provide a new wrinkle to his job. It’s similar to the waiver wire.

“It’s hard to find guys in the trenches pre-transfer portal and it still is,” says Dawson. “Finding big guys that want to play and are good enough to be physically there is a challenge and then the portal brings on a whole other list of challenges.”

Dawson wholeheartedly believes that the spring game and the remaining practices will be one of the most pivotal opportunities for some players to show just how much they have improved.

“You can’t kind of coast yourself into the spring game when you only have fifteen opportunities in the spring,” Dawson said. “The challenge for me is to make sure they understand each one of these practices is like a game for them. You have to perform like it’s a game. Some of the guys who haven’t had a chance to get a lot of reps in Memorial Stadium get to get out there in front of the crowd and get to play. That’s kind of the reward at the end of spring ball.” -30-