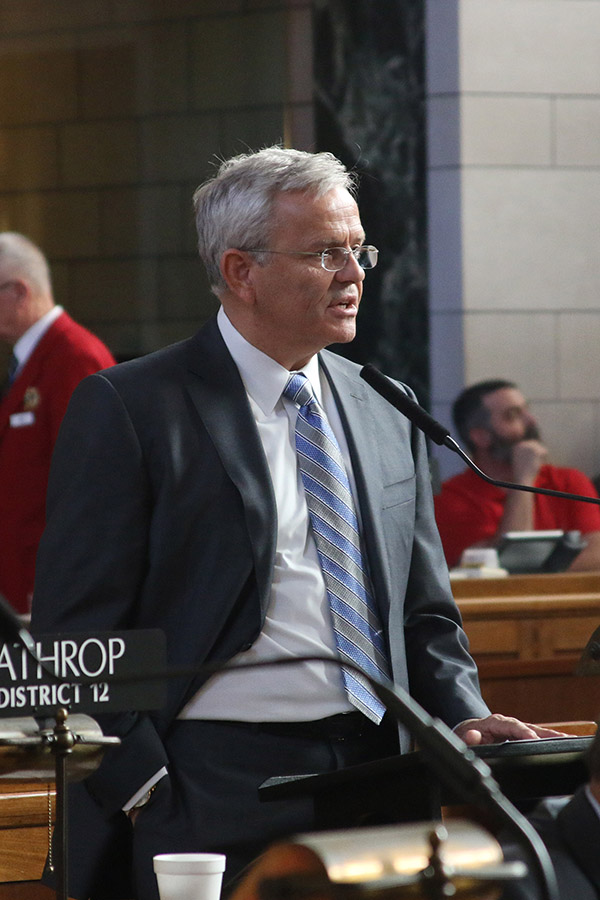 After six hours of debate on Wednesday, the course Nebraska’s criminal justice system will follow remains unclear. More debate on LB920 is expected next week.

The Criminal Justice Institute studied Nebraska’s justice and corrections system as part of the Justice Reinvestment Initiative, a program of systemic reforms Nebraska participated in once previously. CJI recommendations were then drafted into LB920, introduced by Senator Steve Lathrop (Dist. 12 - Omaha) and debated this week.

Lathrop believes the bill is a comprehensive package able to address Nebraska’s mounting criminal justice issues, from prison overcrowding to rehabilitation. Lathrop and other supporters argue the bill is “evidence-based & data-driven” pointing to other states having implemented similar plans.

The strategies identified in the report and in the bill were part of Nebraska Criminal Justice Reinvestment Working Group’s initiatives. The group was established to find ways to reduce inmate populations and lower recidivism while improving public safety.

Supporters of LB920 frame the bill as the only logical response to Nebraska’s prison overcrowding problem. “We can’t build our way out of the problem,” has been the central argument in favor of the bill since its introduction.

Lathrop asserts Nebraska’s population growth, current prison population, and crime rates are the drivers behind overcrowding and can’t be reduced by adding prison capacity, saying, “We can only look around at other states and say this process works. It works. It's been done. It doesn't sacrifice public safety, kind of a better investment of the taxpayer’s dollar.”

Opponents disagree. The most vocal critic of the plan is State Senator Suzanne Geist (Dist. 25 - Lincoln). Geist was also a member of the Criminal Justice Reinvestment Working Group. She agrees with many elements of the bill but believes there are flaws in the proposal, referring to areas of disagreement among the working group.

Geist said, “The consensus items have been discussed at length already during many other bills. I would like to point out to my colleagues that the consensus items are about eighty percent of what is in LB920. They are focused mostly on rehabilitation. Rehabilitation is a large part of what I think is important, and something we as a state have rarely focused on if ever, exclusive of lowering penalties and changing sentences.

“In my opinion, those cost nothing except public safety; rehabilitation treatment, mental health, drug treatment, that's expensive to do that well, even more expensive to make the programming go not only inside a facility but to transition with an inmate outside of the facility, and rarely done. When it is done it can be done well and is something we as a state have not focused on.”

Senator Julie Slama (Dist. 1 - Sterling) opposes the bill. “The State of Nebraska on average, imprisons 289 people for every 100,000 in our population. This number is significantly lower than the national rate. We're in the top 15 for lowest imprisonment rate in the country. Nebraska imprisons far fewer people than the national average. We don't need to free the felons and tie the hands of our justice system.”

Slama referenced NSN’s story on the CJI report from March 8th, mentioning CJI has hired a lobbyist to persuade senators to approve LB920.

Senator Geist has offered an amendment to the bill, AM2337 which addresses opponents’ concerns maintaining many of the consensus items in the bill and focusing attention on matters such as mental health.

Senator Machaela Cavanaugh (Dist. 6 - Omaha) criticized the amendment, “I've been really upset about it because I thought that there was some integrity in what was happening here. And there's been a lot of ‘baloney Skittles’ about how the negotiations went and how different people were treated. But I feel like the body right now is being treated very poorly.”

The Wednesday debate lasted nearly six hours, but no action was taken on the bill. LB920 is likely to be debated more next week. -30-